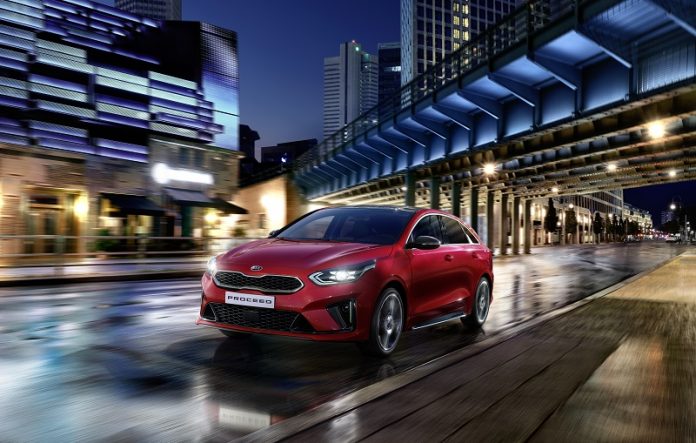 Do you remember the Kia Proceed concept car? It was striking, stunning and quite alluring. It was the type of design that reminded you just how far Kia has come in regards to its design. Today, the Korean brand has revealed the finished article, and whilst it’s not quite as striking, it’s still quite a handsome brute. It’s been no secret that Kia has been keen to take the fight to the Europeans when it comes to driving performance and design, but it looks as if Kia is looking to drive farther forward in this battle. Not only has the new ProCeed been tuned specifically for European driving, but the car itself will be launched exclusively for this area of the market in the early parts of 2019.

The ProCeed may share the same footprint – and indeed the same suspension – as the Ceed and the Sportswagon, but it’s clear that Kia want this model to be the driver’s car out of the bunch. It sits 5mm lower than the Ceed and Sportswagon, and the suspension has been tuned differently as well. The GT model’s development has also been overseen by Albert Biermann, the ex-BMW M who was the mastermind behind the Stinger GTS and the Hyundai i30N. The new ProCeed also offers fully independent suspension, meaning it should offer greater dynamism, better driving engagement as well as better cruising ability. Kia states that a further six months of development took place for the ProCeed, so the GT model should be something a bit special. To help give the ProCeed a sportier feel, there’s a flat-bottomed steering wheel, plus the grey rooflining used for the Ceed and Sportswagon has been replaced with black. The former is mated to a 6-speed manual gearbox whereas the latter is available with a choice of the 6-speed manual or a 7-speed dual-clutch automatic – a first for the ProCeed. In case you’re after a diesel, there is the 1.6 litre diesel, which produces 132bhp and can be mated to either the 6-speed manual, or the 7-speed auto, much like the 1.4 litre petrol.

Will it be practical?

It’s tempting to look at the the svelte shooting brake body and fear that it may not be as practical its more humdrum counterparts. True, the roofline is more rakish than the Sportswagon, but the rear seats have been dropped a little lower in order to compensate for the loss of headroom. Speaking of space, the ProCeed will offer a decent amount of space, thanks to a boot that offers 594 litres of space.

Kia is yet to fully confirm full specification for UK models, but the Korean brand has stated either a 7 or 8 inch touchscreen – depending of trim of course – will be available, as well as navigation, smartphone connectivity, JBL sound system, heated windscreen, wireless phone charging, as well as a drive mode select for models fitted with the 7-speed auto.

In regards to safety, the ProCeed will offer features such as high beam assist, driver attention warning, lane keeping assist with forward collision-avoidance assist as standard. Other systems can be added on as an optional extra, such as adaptive cruise control and lane following assist. Emilio Herrera, Chief Operating Officer for Kia Motors Europe, comments: “The ProCeed takes the Ceed model family in a bold new direction. Where the Ceed Sportswagon majors on practicality, the ProCeed provides couples or young families with the space and versatility of a wagon, combined with an emotive, swept-back design. Where focusing on one of these normally compromises the other, the ProCeed is the first car in the mainstream segment to combine both.”

Full UK pricing and specification is yet to be revealed for the new ProCeed, but more details should be released when the car gets its public debut at the Paris Motor Show.