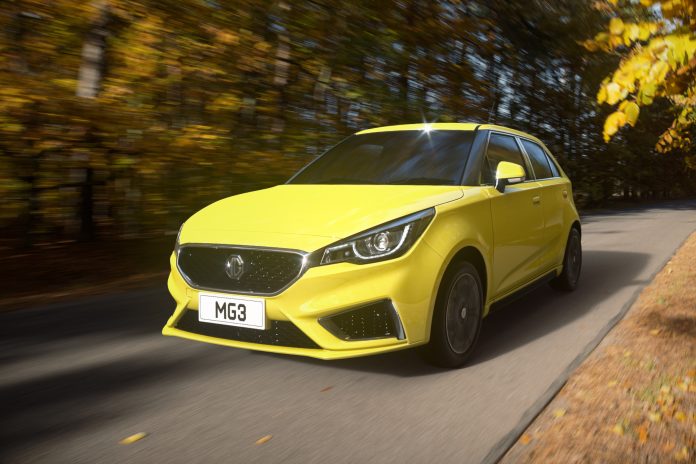 The MG3 is great for those that want a decent looking car on a budget, but it has been due an update for some time. Today, the Chinese-owned brand has revealed pictures of its new MG3 model, but it hasn’t exactly spoilt us with many choice. You see, that’s because just two pictures have been released. Maybe it’s to leave us wanting more perhaps?

MG’s design language has been a bit hit and miss since its new era under its Chinese owner, SAIC, although I quite liked the styling of the original MG3. I wouldn’t go so far to sat it looked fantastic, but it had its own plucky charm about it. The new model looks sharper though, following a similar design to the company’s latest SUV, the ZS. I personally think the headlights look a bit too large, but other than that, I think it looks quite smart.

So it’s got new looks, what else?

As well as a new, refreshed look, the new MG3 has new trim levels, which mirror the rest of the MG range. This means you’ll be able to choose from Explore, Excite and Exclusive. Explore starts from a price of £9,495, Excite starts from £11,395 and Exclusive starts from £12,795, so it’s still as competitively priced as its predecessor. Ok, new trim levels, what about the kit?

Full breakdown of the trim levels is yet to be revealed – much like the photos – but MG has stated customers can expect features such as Bluetooth, reversing camera, DAB radio, and the same 8″ touchscreen that features in the MG ZS, which makes use of Apple CarPlay – no Android Auto I’m afraid…

“We’re delighted with what the design team has been able to create with New MG3. The stylish and sporty good looks certainly won’t fail to turn heads, and with the backing of our comprehensive 7 year warranty and a 0% finance offer, we’re confident that New MG3 will be flying out of our dealerships in no time.”

What do you think of the new MG3? Comment below with your thoughts.