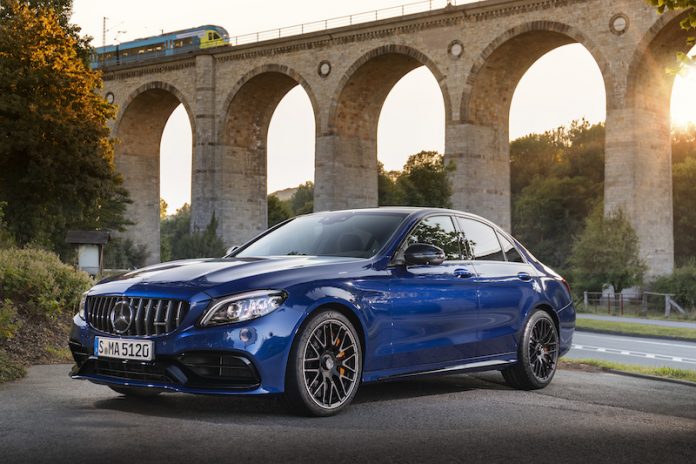 Ah, the Mercedes-AMG C63. A car with a thunderous V8, a high level of luxury and enough power to shred its tyres to the canvas. It’s also a car that offers plenty of choice as you can either have it a non-S or S variant, and you can have it in no less than four body shapes. Today, the German marque has released the prices and specification of its latest model of said car. How much is it and what do you get? Read on to find out.

Well…How much is it?

I hope you’ve had a decent amount of caffeine, because you’ll need you’re wits about you to keep up with the numbers I’m about to catapult at you. So, here goes nothing. The ‘cheapest’ model is the saloon model, which is priced from £66,429, but if you fancy the extra space of an estate, you’ll need to cough up £67,629. If you want it sleeker, and with less doors, than you’ll need to pay £68,719 for the coupé and for the cabriolet, you’ll need £72,537.

Both the non-S and S models are powered by a 4.0 litre V8 petrol engine, which is helped out two turbochargers. Standard models have to ‘make do’ with 469bhp, whilst the S models are able to offer 503bhp. Both engines are fed through to a 9-speed automatic gearbox with power being fed to the rear. There’s not much in between the models, but the coupé will be your best best for speed, whether you go for a standard or S model. The standard model will crack 62mph in just 4.0 seconds, whilst the S shaves off 0.1 seconds to hit 62mph in 3.9 seconds. You may wonder whether it’s even worth going for the S, given that the 0-62 times are marginal, but S is able to hit a top speed of 180mph (coupé and saloon models), whilst the standard model is limited to 155mph. The new Mercedes-AMG C63 is available to buy now, with prices starting from £66,429 and deliveries arriving in October.