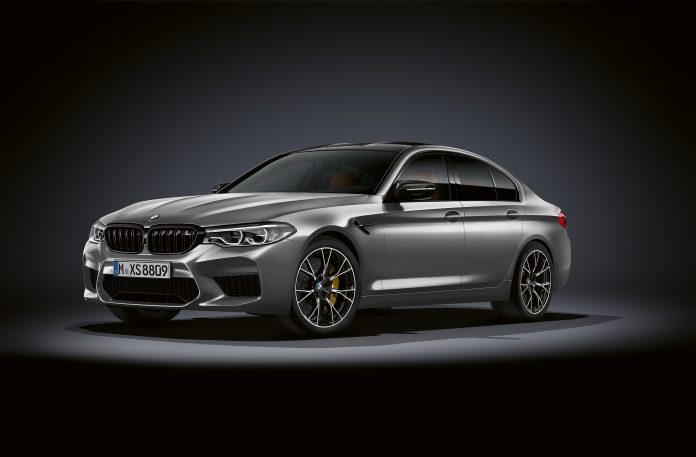 I wouldn’t have thought many people looked at the new BMW M5 and cried out for more power. However, the German brand has added even more, thanks to the reveal of the new M5 Competition. With a price of £96,205, it’s available to buy now for those that want even more from their M5.

How much more power does it yield?

The standard car is able to pump out 592bhp, which I’m sure you’ll agree is pretty ample. The Competition, however, is now packing 616 Germanic horses in its stable. Torque remains the same, but with a tyre-shredding figure of 750Nm, I’m sure that won’t upset many buyers. The 0-62 time is a bit quicker though – 3.3 seconds compared to the standard car’s 3.4. Not much, but it all counts. As with the standard car, the Competition model is fitted with the newly developed M xDrive system, which is able to power all four wheels for better grip when the rears are struggling. That’s not to say that the days of getting the back out on an M5 is over though as you’ll still be able to do that thanks to the choice of driving modes.

BMW has stated that its M5 Competition will handle even better than the standard car, thanks to features such as a tweaked suspension system that is 7mm lower than before. The car is 10% stiffer too, now that the rear anti-roll bar has been stiffened and the front camber has been increased also. Six piston brakes can be found at the front for superior stopping power, but if your wallet is big enough and you intend the track the car, you can opt for ceramic brakes instead. Owners of this car will of course want it to stand out from the standard car and you’ll be delighted to hear that BMW has addressed this. The Competition sits on 20″ M light-alloy wheels, which feature a Y-spoke design and a bi-colour finish. Gloss black has also been applied to the iconic BMW kidney grilles as well as badges and the rear bumper details. Add this to the black chrome exhausts and you have yourself a rather mean looking super saloon. Step inside the cabin and of course you’ll find BMW’s traditional mix of leather and soft touch materials, making for a plush interior. To help make the M5 Competition a bit more bespoke the BMW team have installed black seatbelts featuring the  striped pattern in BMW M GmbH colours, and floor mats with model-specific piping plus an “M5” logo provide the finishing touches. Just in case you happen to miss all of this, the instrument cluster reminds you of the model name when you start the car up.