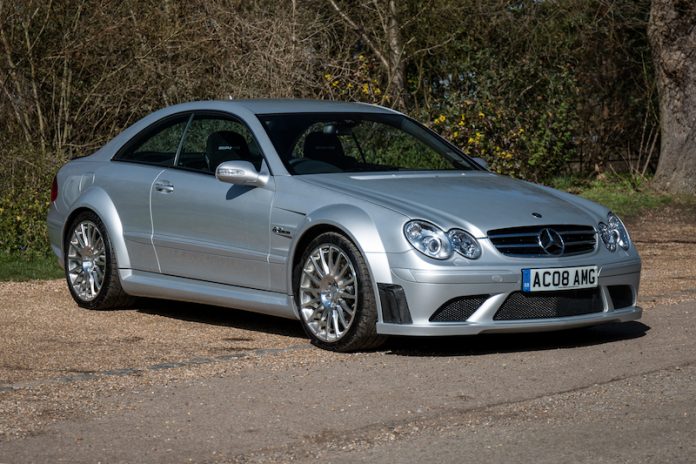 Mercedes AMG. It’s famed for sophisticated looks, warbling exhaust notes, and of course, destroying rear tyres. Some may argue that the latest models aren’t quite as mental as their predecessors, so these two may of high interest to you. Thanks to Silverstone Auctions, a CLK63 AMG Black Series will go under the hammer, as well as a CLK DTM. Both cars are rather rare, and as a result both carry a high premium, but I’ll get on to that later.

Only 25 right hand drive models were made so it’s safe to say that this car will be very sought after. It’s virtually brand new too – it’s covered just 4,000 miles. Powered by a 6.2 litre V8 engine, this particular model is finished in Iridium Silver and rolled off the production line in 2008 before heading to Mercedes-Benz Beaconsfield. From there, it was bought by its one and only owner. Although it was driven many miles, I’m sure it would have enjoyed as the thunderous V8 is able to chuck out 507bhp with 630Nm of torque. This power is fed to the rear wheels via a 7-speed automatic, and is able to propel this German to 62mph in 4.3 seconds before hitting a top speed of 188mph. That’s a lot of performance, and that comes at a price. Silverstone Auctions has placed an estimate of £110,000 to £125,000.

The second Merc offered by Silverstone Auctions is a CLK DTM, which is even more powerful than the Black Series. This too has a V8, albeit with a smaller displacement of 5.4 litres. It chucks out more power though, as it’s able to muster 582 anger German horses, with a gigantic 800Nm of torque. Using rear wheel drive and a 5-speed automatic, the DTM is able to smash 62mph in 4.0 seconds flat before maxing out at 199mph.

Just like the Black Series, this is a rare right hand drive model – just 40 made – and is a low mileage example. Just 7,580 miles have been covered in this Obsidian Black example. It’s also just sought after and after being enjoyed by two owners it’s up for auction with an estimate between £180,000 and £220,000. Just to entice you a bit more, it also comes with a personalised plate of ‘DT55 AMG’ – if that’s your sort of thing of course. Harry Whale, classic car specialist, Silverstone Auctions said, “Both these prized modern day classics are stripped out racers at heart. Lighter and more powerful than their showroom cousins, these cars were built for the track, so it’s fitting that we’ll be offering them at our May Sale held at Silverstone.” “Not only are these two of the most desirable high performance modern classics on the market, but both are presented in exceptional condition with low mileage and low ownership. We expect there to be significant interest from around the world on auction day,” concludes Harry.