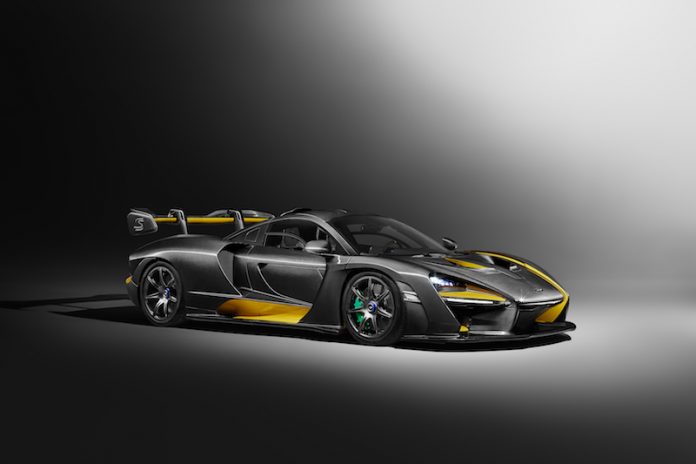 Now I know up until this point I have not covered the McLaren Senna, but let me quickly summarise. I think it looks awful, but I respect that McLaren has sacrificed looks in a bid to make the Senna as ferocious as possible. The new MSO McLaren Senna on the other hand, definitely loos better if you ask me. Ok, so it’s still far from a looker, but that won’t matter when you are ripping up any given race track in the world.

To name a model after the legendary F1 driver is a pretty big deal, but this MSO model goes one step further to further commemorate the late, triple world champion. There are plenty of yellow and green details on the model, which are inspired by the colours of the Brazilian flag, the home nation of Ayrton Senna. Let’s start with the body itself though. For the MSO version it’s finished with a Visual Carbon Fibre, which is made up of 67 parts and takes almost 1,000 hours to produce. That isn’t the only process that takes a fair amount of time to put together either; the Solar Yellow detailing on the sill exteriors, rear wing and front aero wing blades take around 250 hours to bring together. These combine with the Laurel Green brake calipers that sit within new 7-spoke hybrid carbon fibre alloy wheels. Step inside this raw, track-racing monster and you’ll find Laurel Green stitching, a yellow strip on the steering wheel and Senna ‘S’ logos in the headrests. This all joins the Carbon Black alcantara trim that is used on the seats, door cars and the dashboard. Remind Me Of The Figures?

The looks may be divisive, but no-one can argue about the performance that the Senna is able to offer. It features the same 4.0 litre twin-turbo V8 engine used in the 720S, only the power has been dialled up to 780bhp, with 800Nm of torque. Mated to a seven-speed automatic gearbox and rear wheel drive, the Senna is able to smash 62mph in just 2.8 seconds and it will carry on to a top speed of 211mph. It’s not just all about outright speed though as the Senna is designed to handle as well as an out-and-out racer, but still be legal for the road. As McLaren said, the Senna is legalised for road use, but not sanitised to suit it. At 155mph it’s able to produce no less than 800kg of downforce, plus there are carbon ceramic brakes and Pirelli P ZERO Trofeo R to ensure it will carry as much speed as possible through the corners. So, if you happen you see this in your rear-view mirror – albeit unlikely – you may want to consider getting out of the way.

What does McLaren say?

“The McLaren Senna customers in the process of specifying their own, personalised cars are almost without exception commissioning an elevated level of MSO content, so we are definitely appealing to our target audience,”  explained Ansar Ali, Managing Director, McLaren Special Operations. “With the car having generated so much interest since its unveiling in December, we knew we needed to produce something very special in order to showcase the unique talents of McLaren Special Operations; the McLaren Senna Carbon Theme by MSO at the Geneva Motor Show is exactly the kind of project we thrive on delivering and once customers have had the opportunity to view it in person, I would  not be at all surprised to see a rise in expressions of interest for MSO Visual Carbon Fibre cars similar to this one.”