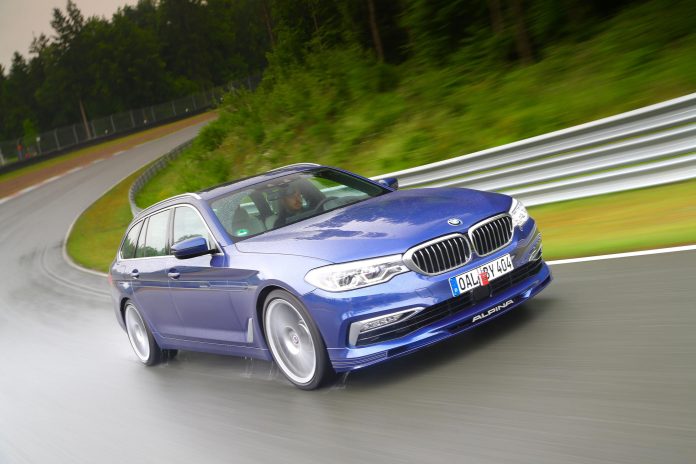 Once upon a time, estate cars were rather popular as they offered more space than you average saloon, but they have now fallen out of favour thanks to the surge in SUVs. Alpina, however, has a new model that may entice people back to the estate genre. It’s the called the B5 Bi-Turbo Touring, and how’s this for headline, it’s expected to be the fastest production estate in the world.

Let’s not muck about here, let’s be out with it. Thanks to a reworked 4.4 litre V8 bi-turbo petrol engine, it’s able to hit a top speed of over 200mph. In an estate?! Oh yes… This is courtesy of a power output of 600bhp with a very generous 800Nm of torque. 0-62 is dealt with in just 3.5 seconds, and if choose to have the saloon, you will cut that time by 0.1 seconds. This Ger-manic power is fed through a BMW four wheel drive system – a first for the Alpina B5 – and an 8-speed ZF automatic gearbox. To help achieve the extra power, Alpina’s 70-strong engineering team installed a new wide-bore air intake system to help deliver optimal airflow to the meaty V8. On top of this, the standard turbochargers have been binned and instead, a pair of specially-developed twin-scroll turbochargers have been installed instead, which operate at a a pressure 1.4 bar to give a near-instant throttle response.

That is just the tip of the iceberg though, in fact all key areas of the car have been improved to make the car on which its based on – the 5 Series – even better. The rear brakes have been made larger as they receive less air to cool them, a new indirect intercooler system has been installed, and the gearbox now receives additional cooling as well.

As mentioned further up the article, the new B5 model is the first to have BMW’s four wheel drive system, a necessary requirement to handle all that torque. Don’t think it’s all going to be neutral and understeery though as 90% of the power can be fed to the rear to ensure that the car is able to deliver a more… ‘dynamic’ drive. There is also a limited slip diff too, but you will need tick the appropriate options box to receive this. As well as four wheel drive, the B5 Bi-Turbo also receives active rear steering, which is another first for this model. This make the car more manoeuvrable at lower speeds, and it provides better stability at higher speeds. At each corner you will find big 20″ lightweight forged alloys, which are wrapped in specially-developed ‘ALP’ labelled Pirelli P Zero tyres. Even though the new model has the four wheel drive, it’s actually around 30kg lighter than its predecessor.

As Premium As It Is Rapid

Despite the outrageous performance figures, this is not a car built to demolish tracks in the pursuit for the fastest lap time. That’s not to say it can’t do it of course, but Alpina’s aim has always been to make the cars as luxurious as they are fast. This means buyers will receive handcraft interiors which can be specified with an almost limitless range of options and leather trims according to the German brand.

Priced from £91,000 (saloon is £89,000) standard features include soft Nappa leather, ceramic-finish control surfaces, ALPINA roundels on the seat backs and a rear view camera to name a few. There will of course be other goodies – there’d have to be right, for a car that costs almost £100,000? To add to the luxurious features, Alpina has also added a new ‘Comfort Plus’ mode for the bespoke adaptive dampers to ensure that the B5 Bi-Turbo is able to offer the highest levels of comfort possible. This then, could well be one of the best ways to lug about plenty of cargo over a large distance, very quickly.

“Our cars are for driving enthusiasts who value a blend off qualities that can only be delivered by immense attention to detail and a single-minded focus on one type of owner,” explains ALPINA GB’s Jonathan Noy. “The B5 Bi-Turbo is built with just one powertrain and one chassis specification, which allows our engineers to calibrate every component and every control system to work perfectly together without compromise. “ALPINA’s dynamics specialists have spent months honing the chassis, not hurling it around a race track but simply driving as customers would, on roads, enjoying every mile however fast or slow. The result is a pin-sharp driving experience combined with remarkable ride quality.”