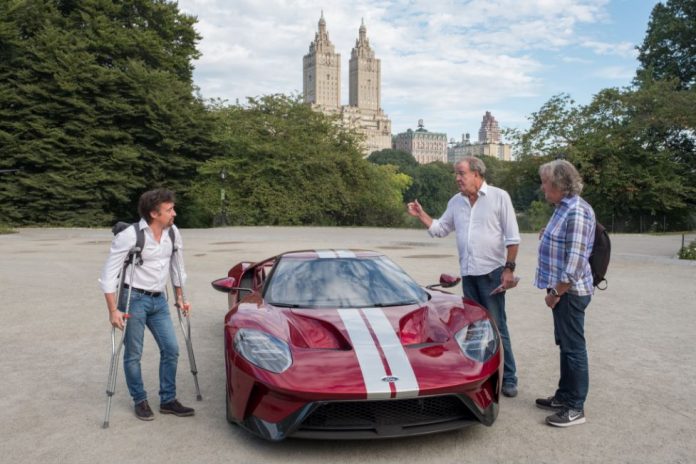 It’s Friday, which means it’s the weekend, but it also means that it’s time for another instalment of The Grand Tour. The show’s return didn’t quite hit the mark, so what did episode 2 have to offer? This article will contain spoilers, so you have been warned!

A Top Gear-Styled Race, Only It Isn’t

I used to love the big races they did on old Top Gear, even though it seemed a bit futile as Clarkson won almost every time. Despite this though, I always used to enjoy watching Hammond and May argue like an old married couple, whilst Clarkson was somewhere driving a fast car and mentioning something about “ppppooooowwwwweeeeerrrrr”. This week’s episode of The Grand Tour brings us such a race, and the formula is so similar, you could stick it on Dave (a UK TV channel for those reading this from overseas) as a Top Gear repeat and I don’t think too many people would see the difference.

You may think I’m highlighting this to be a negative, but believe me I’m not. If anything, it’s a positive as I feel sometimes on The Grand Tour, the three of them have got carried away and lost their roots a little bit. No such problem here though, as we see Jezza in the brand new Ford GT whilst May is left to get public transport and then a plane… and then some more public transport. The race starts in the Big Apple and finishes at the iconic Niagra Falls.

Where’s Hammond though? Is he still in hos – oh no, here he comes, hobbling in to shot on crutches following the aftermath of his near-fatal Rimac crash. The three of them have a bit of banter before Clarkson pulls away and makes the other two eat the New York dust that’s been sprayed up by his 647bhp Ford. From there, we see May’s awful beside manner as he leaves Hammond to struggle down stairs and subway barriers. This sets the mood in what turned out to be an episode with lot of jibes made towards the poorly hamster – I hope he has thick skin!

I criticised last week’s show for being a tad light on car content, so it was good to Clarkson speak a bit more thoroughly about the GT that he was driving, as for me it makes it more interesting. I love the banter, don’t get me wrong, but it needs to be mixed with proper knowledgeable car content. I have to say, it was ingenious and evil in equal measures to not only downgrade Hammond and May’s flight, but to also take way their right to have a well-deserved beer whilst in the air. You’re a cunning old man Mr Clarkson. The first part of the film then ends, which means it was time for Conversation Street, which I rather enjoyed this week, especially when they were talking about the idea of ‘reverse sponsorship’, or as Hammond put it correctly – extortion. As enjoyable as it was, once again there wasn’t much in the way of car talk. So little in fact that I’m struggling to think of an actual car topic.

Oh, self-driving cars – almost forgot about that, maybe because I don’t really consider them as ‘proper’ cars. It seems as if the GT trio have a similar point of view, which should come as little surprise. The end of Conversation Street was then used to link in to this week’s car test at the Eboladrome, and I’ll give you a hint, it’s bright green and it’s made by Mercedes.

An AMG That Doesn’t Ruin It Tyres?!

Guessed it yet? It is of course, the Mercedes AMG GTR. Clarkson has the task of tearing this car around the Eboladrome, and normally when you find him testing an AMG model, you’ll see more smoke than car. This is not the case with the GTR though, as it all looks clinical as he goes through ‘Your Name Here’ corner. Thankfully, the film features the sort of information that car geeks like me enjoy and it helped to make up from what I felt was lacking somewhat from Season 2’s opener.

He speaks positively about the car, and it seems as if all is going well, but he then makes a very valid point, one I’ve never thought of. He questions why the car’s engine has less power than some of the other models in the AMG range. He then goes on to say that there will be a faster GTR coming out at some point. Ah, of course, I hear you say. Clarkson also states that the car should be more like a typical AMG, a car that’s as mad as a box of frogs, which likes to powerslide around every corner whilst destroying tyres. So with this in mind, he questions why anyone would buy it and who would buy it. With that, the test is over.

Who is the new driver?

This has been something that has been teased over the last few weeks as The American has been placed in a scrapheap following negative feedback from viewers – including me. So we’ve had a stunt driver in contention, Mark Webber, and even a car thief. The time has come though, and the GT team need someone to take that AMG GTR for a fast lap, so who is it? Erm, no-body knows.

The Stig formula has worked very well on Top Gear, but the GT team are not able fully replicate that due to copyright issues and so forth. What the production team has done instead though is pretty clever. We cut to a female driver who is not faceless like The Stig, but she is wearing a full crash helmet, so you can only see a slither of her face. Her name is never stated, so what we have here, is a Stig situation, but without The Stig, or any difficult legal barriers. Very shrewd if you ask me…

***Edit: After seeing her name in the end titles of episode 3, I can see that the new driver is Abbie Eaton – mystery solved! However, why not just say it was her, rather than use secrecy?***

This week’s ‘Celebrity Face-Off’ sees cricket and baseball put head-to-head as Kevin Pietersen and Brian Wilson go against each other in the F-Type. Last week I mentioned that I was a tad uncomfortable watching a low-slung sportscar being hooned about on gravel. That aside though, it was another decent interview and there was some decent chemistry, plus the two of them got very close to each other in regards to their results of their timed laps. Who won though? You’ll have to watch and find out. After Hammond had his necessary pat down (bit of a long story) from the airport’s security team, he and May boarded the flight in an awkward fashion before then making their way to their economy seats. If that wasn’t bad enough, they are inevitably told they cannot have a nice cold bear to help quench their thirsts. Oh well, you know what they say, worse things happen at sea… Their exit off the plane is just about as awkward as the entry, and the pair now have two buses to get, so at the moment it looks like anyone’s race. You know when a Top Gear race is getting serious when you see James may running. This time though, he is having to push the hapless Hammond, who’s had to put up with his colleague’s lack of compassion. For a period, it looks as if they are going to have a clear win as Clarkson gets stuck in traffic and he also has to throw some more go juice in the car, but in typical fashion, the production team make the finish seem closer than it probably was, but I still had no idea who would win, even though Clarkson has won almost all of them as I mentioned earlier. Who won though? Oh, I won’t ruin that one for you…

Episode 2 was an improvement to last week, as it was able to throw in a bit more knowledge with the banter, and the banter itself seemed more natural. The Grand Tour has felt a bit too scripted at times, so it was good to see that it felt a bit more organic this week. I feel the new driver situation could work well and I look forward to seeing how that develops, plus I’m quite enjoying the new Celebrity Face-Off feature even though the intro looks God awful and it’s still a bit painful to see the Jag being taken on the gravel section of the track…

All-in-all, this week was better than episode 1, but I still feel there is room for the series to grow more and it feels like it’s just starting to get going. Now begins the wait for episode 3 – I’d best start counting down the days now then.