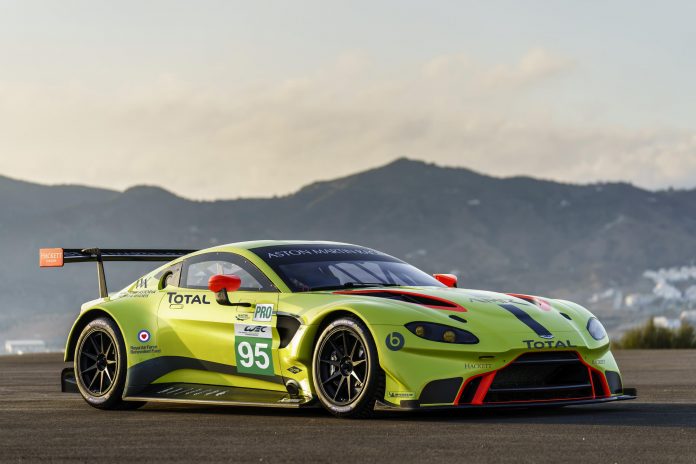 The dust has barely settled on the grand reveal of the new Aston Martin Vantage, but already the British brand has revealed its new Vantage GTE racer. Designed in parallel with the road car, the race car has already completed 30,000km of testing, which includes two 30-hour tests. It has big shoes to fill though, as it will be replacing the previous V8 Vantage GTE, which won multiple Le Mans races, meaning it’s the teams most successful competition car of all-time.

It may be powered by the same AMG-derived twin-turbo V8, but in the GTE is produces 536bhp compared to the road car’s 503bhp. The torque is also improved, with 700Nm produced as opposed to 685Nm produced by the standard car, not that the road car is a slouch of course. This power is fed through the to rear wheels via a Xtrac six speed sequential transmission, and although the performance stats have not been confirmed, it’s likely to be rather brisk.

Another area where the Vantage GTE improves on its road car stablemate is the aero – there’s lots of it. At the back there is a massive rear wing that looks suitable to use as an ironing board, plus there is a rear diffusor that looks simply biblical. The front features the obligatory front splitter, which makes the front end look even more aggressive than the road car, which is no mean feat.

John Gaw, Managing Director, Aston Martin Racing said, “It’s terrific to be involved in this exciting new chapter for Aston Martin Racing. The increasingly tough competition in the GTE class and the prospect of two visits to Le Mans and a return to Sebring within the 2018/19 super-season is thoroughly tantalising. To conduct the development process of this car so closely with Aston Martin’s design and engineering teams was essential for both road and race car to retain the same underlying DNA. We believe the Vantage GTE will bring further success worldwide to Aston Martin Racing in the coming years”.