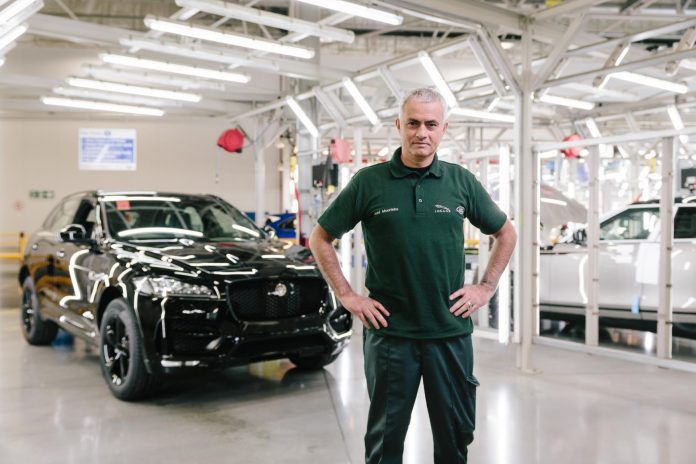 Staff at Jaguar’s factory in Solihull were in for quite surprise the other day as Manchester United FC manager José Mourinho dropped by. There was a reason for his out-of-the-blue visit though, as he is the 100,00th customer of the brand’s F-Pace SUV.

However, don’t think that he was just there to check the progress of his car, oh no. Instead he slipped on Jaguar branded uniform and made his way to the production line to help work on his new set of wheels. Naturally, he also gave a motivational team talk to the employees, demonstrating the important of having pride and passion in their work. It’s rumoured he mentioned something about parking the bus as well, but that’s another matter…

Mourinho said: “It was an amazing experience to visit Jaguar’s factory and see all the cars, technology and hard work that goes into developing such a beautiful car. Jaguar is a brand that I have been involved with for many years. Back in 2014, I was the first UK customer to receive the F-TYPE Coupe and now to become the 100,000th Jaguar F-PACE customer is something that is very special.” Ian Callum, Director of Design, Jaguar said: “It’s great to have one of the most successful football managers drive the F-PACE, our SUV that has been voted as the best and most beautiful car in the world by the 2017 World Car of the Year jury. Just like José Mourinho, the F-PACE is all about individual style and top performance.”

Check out a short video of Mourinho’s surprise visit here: