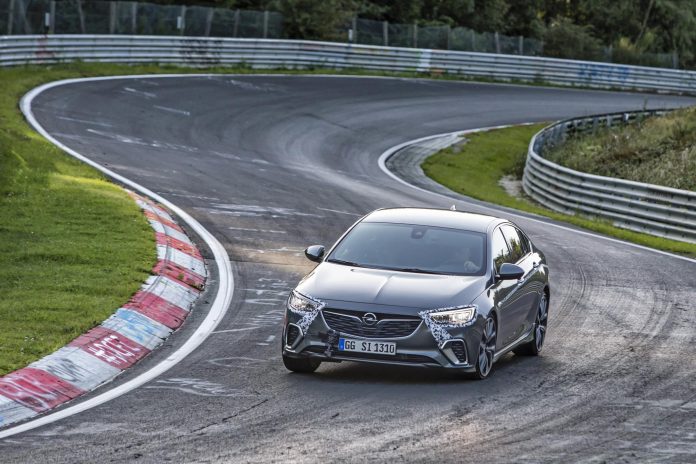 Today, Vauxhall has announced it has a new fastest production car to go around the Nurburgring and it’s an Insignia. However, it’s not just any Insignia, it’s an Insignia GSi. Developed by the brand’s top European Engineers, the new model is quicker and lighter thanks to a revised chassis and all-wheel drive.

Powering this powerful repsmobile is a 2.0 litre turbocharged petrol engine that’s able to offer 252bhp with 400Nm of torque, and is mated a 8-speed automatic gearbox and all wheel drive. Performance stats are yet to be announced, but it ought to be brisk as it’s smashed the time set by the Insignia VXR at the Green Hell by 12 seconds, despite having less power. As well as the lighter construction and revised chassis, the GSi sits on big 20″ alloys which are wrapped in sticky Michelin Pilot Sport 4 S tyres, with a ride that has been dropped 10mm compared to other Insignia models. Peeking through the chunky alloys are big brakes supplied by Brembo with four pistons for better stopping power. Speaking about the new car,  Volker Strycek, Vauxhall’s Director of Performance Cars and Motor Sport, commented; “The lightweight architecture, excellent chassis configuration and unique all-wheel drive system, along with the performance tyres make the GSi as precise and sharp as we wanted it to be.

“The results speak for themselves, and the new Insignia GSi can lap the Nürburgring up to 12 seconds faster than its more powerful VXR predecessor. Where the course becomes more demanding and requires the car to react with more agility and precision, such as in the corners or stretches with low friction, the GSi is definitely faster and easy to control.”

The new Insignia GSI will be available as of next year, with prices yet to be announced.