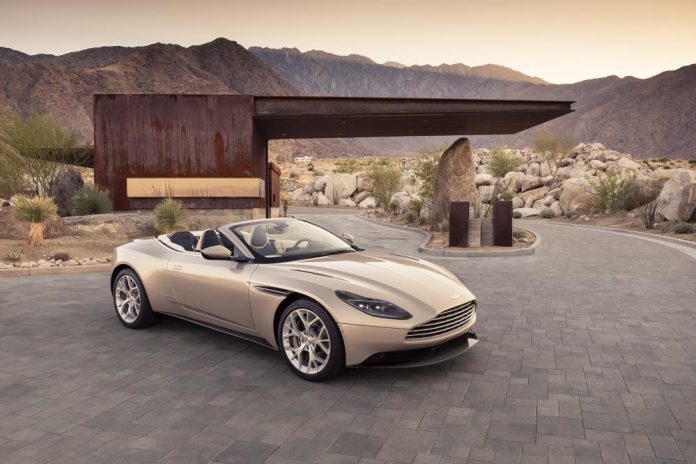 The Aston Martin DB11 is indeed a wonderful way to waft around in comfort and luxury, but how do you make it better? You take the roof off of course, and that is exactly what the British luxury brand has done with the new DB11 Volante. There is a slight snag though, only the V8 will be available. I doubt that’s going to upset that many people, because just look at it! It could be powered by an EcoBoost and people wouldn’t care. Actually, that’s silly – they would, but you get what I mean.

That 4.0 litre V8 will still offer more than enough power though, as it’s good for 510ps and is mated to an eight-speed auto that’s as smooth as velvet, with power fed to the rear wheels – naturally. One of the biggest challenges with making coupes in to convertibles is of course rigidity. Taking away the roof means you are losing a large chunk of the car that provides strength and stability. This means that you need to beef the chassis, which makes the car heavier and more cumbersome.

There should be no such problem with the DB11 Volante though as it uses the same all-new bonded aluminium chassis as the coupe. Not only is it lighter than the DB9 Volante that it replaces, but it’s more rigid too, so it will handle better, feel more nimble, plus it will be more fuel efficient. Not only that, but it’s the first Volante model to have isofix attachment points for the rear seats, so it’s almost practical!

The roof is made of fabric and is available in the following choice of colours;  Bordeaux red, black silver or grey silver, and is made up of 8 layers, so the wind noise should be kept to a minimum – when the roof is up of course. The roof is able to be lowered in 14 seconds and 16 seconds to close, and can be operated at speeds up to 31mph. The new hood system has also led to a 20 per cent gain in boot volume compared to the outgoing DB9 Volante. It should last you a lifetime too, as the engineers tested the system over 10,000 times in special weather chambers designed to simulate conditions in the world’s harshest environments. Prototypes were also tested Death Valley and the Arctic Circle, so it should be absolutely fine pottering around Kensington.

How much is this luxurious dollop of Anglo-German V8 power? It will cost you 159,900 of your fine English pounds and the first delivery dates are due to be early 2018. Aston Martin President and Chief Executive Officer, Dr Andy Palmer, said of the DB11 Volante: “For many of our customers, indeed many generations of Aston Martin customer, the Volante has always offered something very special: a unique combination of elegant style, innate sporting ability and sensory engagement that lifts it above other open-top cars. The new DB11 Volante captures those qualities perfectly and promises the kind of pleasure and enjoyment that can only come from driving an open-top Aston Martin”.

Max Szwaj, Aston Martin Chief Technical Officer, adds: “The challenge of creating a convertible car is retaining structural and dynamic integrity. To protect the former you need strength and rigidity, but to preserve the latter you need to keep weight to a minimum. With the DB11 Volante we have maximised the advantages of the DB11’s all-new bonded structure to underpin our new Volante with a structure that’s 26kg lighter and 5 per cent stiffer than its predecessor. The result is a truly magnificent car. One that combines greater performance and agility with increased comfort, refinement and interior space for occupants and their luggage”