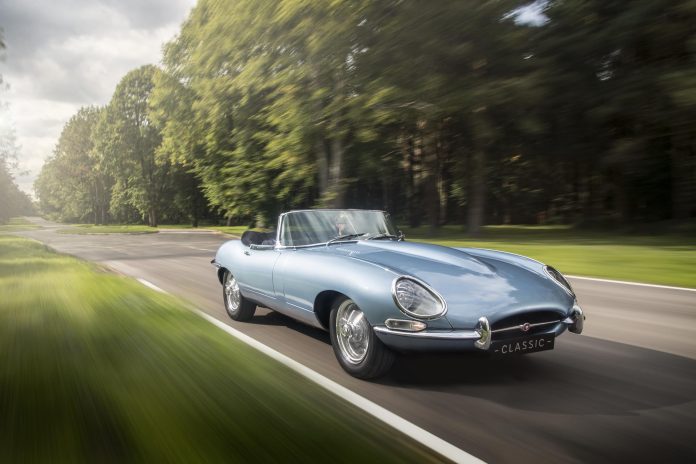 Today marks a big day for Jaguar. Not only has the British brand announced it will sell cars from 2020 will be electrified, but its also announced its restored a classic E-Type. The latter may not sound like ground-breaking news, but it’s petrol-pumping six-cylinder heart has been ripped out and in its place is a battery. It’s called the E-Type Zero, due to the fact it emits no CO2. “Sacrilege!”, I hear you cry. Well, don’t be so hasty, as Jaguar’s ‘Classic Work’s department has gone about it a clever way.

Not Upsetting The Balance

Yes, the petrol engine has been taken out in place of an electric motor and some batteries, but the car itself remains largely unchanged. This is because the battery has been designed in a way so it can occupy the same place as the old XK six-cylinder engine and it has a similar weight. The electric motor lies behind the battery pack in the same place as the gearbox would have been in this original 1968 Series 1.5 model. This means that the car is able to offer the same weight distribution as it did before. Because the changes have been well thought out, it means that the roadster is able to operate with the same suspension and brakes, so the driving sensation will be still be familiar. The only drawback is that you will be driving around in near silence rather than enjoying the thrum of the combustion engine that used to be tucked away underneath that pretty, long bonnet.

It’s Not All Bad Though

The noise may have gone, but there will be more performance. The battery is able to produce 220kW, which in bhp equates to a healthy 295. That’s more power than the original engine, and as a result the 0-60 time is 5.5 seconds – one seconds faster than the original. The car is also 46kg lighter than it was originally, which means it will be more efficient. As well as the new electric heart, the E-Type Zero has LED headlights to further aid efficiency, and the instruments on the dash have a different look. But these touches have been inspired by the original model, so although it’s new, the E-Type should still be able to offer the same charm as it did when it first rolled off the production line in the 60s. Plus, at first glance you would have no idea it’s electric and I’m sure Enzo Ferrari would still deem it to be “The most beautiful car ever made”. “In order to seamlessly combine the new electric powertrain of E-type Zero with the dynamic set-up of the original E-type specification, we have limited the vehicle’s power output. We believe this provides the optimum driving experience.”

So what are your thoughts? Do you love the forward thinking direction, or do you think this is a manufacturing crime? I’m….conflicted.