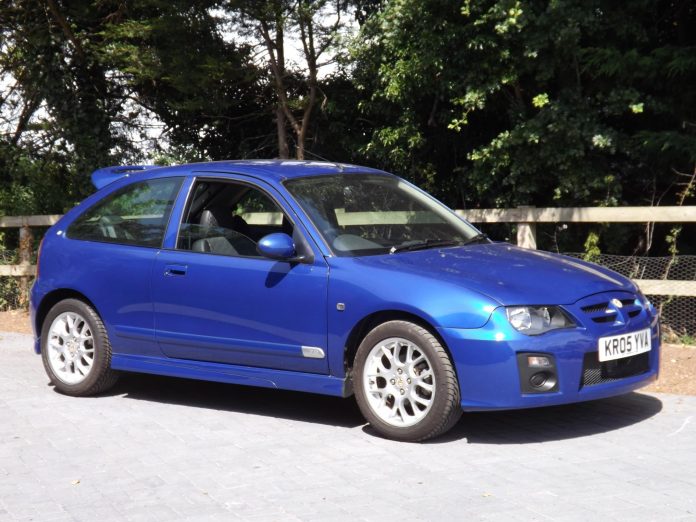 As you are probably fully aware, I am a man that likes his hot hatches. There have been many made over the years – some have been brilliant and some have been, err… not so brilliant. The ZR may not be the most popular hot hatch on the used market, but MG certainly knows how to make a decent handling car, plus the brand’s owners club is the largest in the world. Therefore the ZR is always likely to gather a bit of interest, especially examples such as this.

Classic Car Auctions is able to offer such a car, which has covered just 759 miles since it rolled of the production line back in 2005. Whilst MG Rover was going in to the receivership and Tony Blair was elected for a third term in office, this ZR was bought by its first (and only) owner before shortly being put in to storage and being declared SORN. The 3-door model for auction is presented in blue with a black check interior, which has been kept in pristine condition thanks to care of its former owner. Underneath that timewarp bonnet lies a 1.4 litre petrol engine which is mated to a 5-speed manual gearbox and is good for a whopping 103bhp. I know, that’s not fast by today’s standards – or 2005 standards for that matter – but it’s the handling that will make this car worth the money to buy.

Speaking of which, it’s about time I told you the price. The estimate for this spotless British hot hatch is between £5,000-£7000, making it much more obtainable than, let’s say, a pristine Peugeot 205 GTI. I know, I know, you can’t compare the ZR to a 205 GTI, but what I’m getting at is if you fancy a pristine hot hatch from yesteryear, this ZR could well be your best option.

“This car is simply stunning in every respect!” states Simon Langsdale, classic car consignor, CCA. “Low mileage modern classics are extremely popular these days, and I very much doubt there’s another one in this condition and with this mileage out there.”