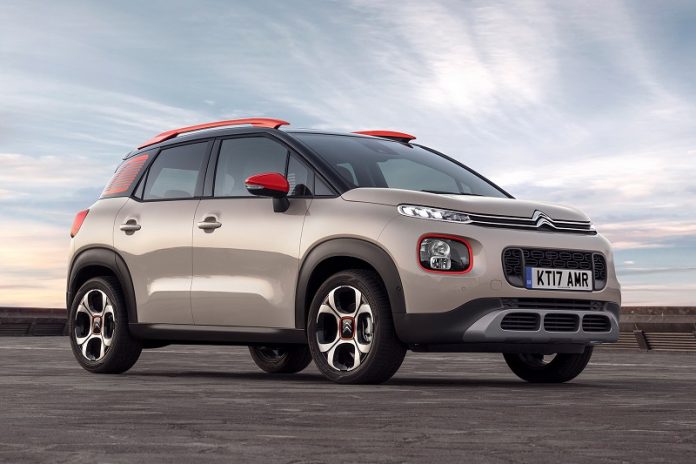 Today, French brand Citroen has announced the pricing of its new C3 Aircross compact SUV, which is set to go on sale on the 1st of November. Fitted with the PureTech 82 petrol engine with a manual gearbox, the base model (Touch) will start from £13,995.

There will of course be a choice other petrol engines, as well as diesels, both of which can either be mounted to a manual or an auto gearbox. At the other end of the spectrum, you have the range-topping Flair model priced from £19,720 which is fitted with the BlueHDi S&S engine, also fitted to a manual gearbox.

A Nice Place To Sit

Other the years Citroen has been known for making comfortable cars and the new C3 Aircross is no different. In fact the car has even been built around the brand’s Advanced Comfort programme, meaning the cabin has ergonomic seats trimmed in a special upholstery, plus there is a 360 degree panoramic roof designed to make the inside feel more airy.

There will also be a good amount of storage space inside, making it ideal for family life and the boot is able to swallow up 410 litres – class leading, don’t you know. If the range-topping Flair model is selected however, you can opt to have the sliding rear bench, which increases the boot to 520 litres.

The new C3 Aircross comes with a wide range of technology for both convenience and safety, which is bound to put it in good stead for those looking to buy it as a family car. In regards to convenience, it will offer a 7″ touchscreen which will be home to features such as sat nav, air con and DAB radio. The new Aircross is also the first Citroen model to boast wireless charging which bound to come in handy for longer trips.

On to safety now, the new C3 Aircross will be home to up to 12 driving aids including head-up displays, traffic sign recognition, keyless entry, park assist and lane departure warning, to name a few. There is also a system called Grip Control, which works with the Hill Descent control to ensure the SUV does not slip on steep inclines, whether it be forwards or backwards. Well the SUV market is awash with alternative options, so the C3 Aircross could have a tough fight on its hands. Its low price point will go in its favour, and will put it up against the likes of the FIAT Panda City Cross and Nissan Juke. The City Cross is cheaper although it’s not quite as stylish whereas the Juke is more expensive, but is a popular choice in this segment.