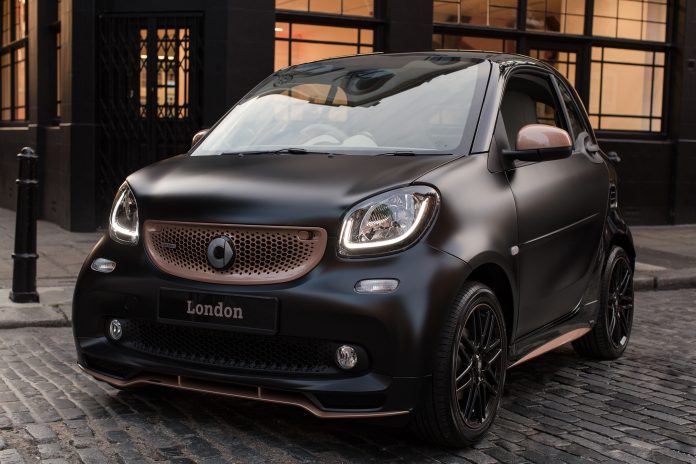 I’ll admit it. I’m not a fan of the smart car, however, I am a fan of rapper Tinie Tempah. So when smart announced earlier this week it’s to collaborate with Disturbing London, it certainly piqued my interest. For those of wondering what on earth ‘Disturbing London’ is, it’s an entertainment company set up by successful UK rapper Tinie Tempah and music manager Dumi Oburota. So, what can we expect from this rap inspired model? Now many will argue that rappers are the go to guys when it comes to taste, but the new Disturbing London smart models aren’t as vulgar as you may predict. Inside you’ll find branded floor matts as well as a gearknob bearing the company’s logo. The dashboard is clad in rose gold panels, which is not to my particular taste, but I do like the black paint that adorns the body work. The Disturbing London smart will be made available in either the fortwo coupé (£15,895) or the forfour (£16,390), both of which will come with a 90hp turbocharged petrol engine mated to a 6-speed automatic gearbox. In regards to specification, the Disturbing London model comes with features such as BRABUS detailing, rear parking sensors, smart media package and leather seats. Krishan Bodhani, Head of smart UK, said: “The two cars that are the culmination of our collaboration with Disturbing London look incredible. I am delighted we have been able to build on this already successful partnership: it’s a testament to the authenticity and credibility of our relationship that we are able to offer a limited production run of smart Disturbing London special edition models that we know will appeal to our smart audience.”

The smart Disturbing London is now on sale with prices starting from £15,895 but production numbers are limited.