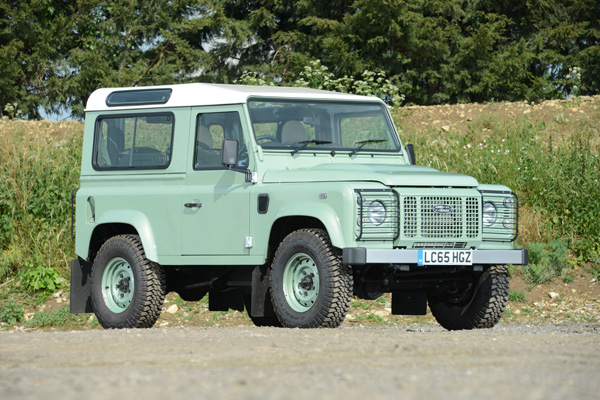 When it comes to cars and Rowan Atkinson CBE, the car that springs to mind is his McLaren F1, a car which he famously crashed. Twice. Mind you, that didn’t stop it from being sold for a cool £8million. Obviously it was repaired (again) before it was sold of course…Anyway, I’m digressing – the car to be auctioned by Silverstone Auctions is not as exotic – or expensive – but it should still prove to be an attractive prospect.

The car is question is a Land Rover Defender, but not just any Land Rover Defender. This is a 90 Heritage model from 2015, which is one of just 400 to be produced and is part of the Land Rover Defender Celebration line. It may be a modern motor, but it looks fresh out of the 40s as it has details such the HUE 166 graphics – reminiscent of the pre-production from 1947. The Grasmere Green is contrasted with an Alaska White roof, plus a heritage style grille, silver front bumpers and heavy duty wheels. The 90 Heritage model includes aluminium clock, aluminium door handles and perforated leather on the steering wheel, gear stick and handbrake, as well as cloth seats with vinyl sides and backs. Completing the look is a padded cubby box as well as model specific floor mats. In regards to kit, the 90 Heritage offers equipment such as an upgraded DBS stereo, mud flaps, tow bar, and bespoke dog guard also feature in this particular example.

This Defender Hasn’t Gone Forth

Rown Atkinson CBE may be famous for shows such as Blackadder Goes Forth, but his Land his Defender is far from wel travelled. Since Atkinson took delivery of the car on the 28th of November 2015, the car has covered just 2,260 miles. This retro off-roader has been recently serviced though, so it’s safe to say the car will run like a dream. Because of this, Silverstone Auctions has slapped an estimate of £38,000-£45,000 ahead of its sale which is taking place on the 29th and 30th of July. “Silverstone Auctions are very proud to offer this car with such a distinguished pedigree and which, in our opinion, represents the very best of a great British tradition. Never has there been a car that has so captured the imagination of the world,” explains Nick Whale, managing director, Silverstone Auctions.

“This distinctive limited edition is sure to be highly sought-after, offering buyers and collectors a slice of exclusive Land Rover history, and, with celebrity ownership by the hugely successful and admired Mr. Rowan Atkinson, this particular car has even more added appeal.”