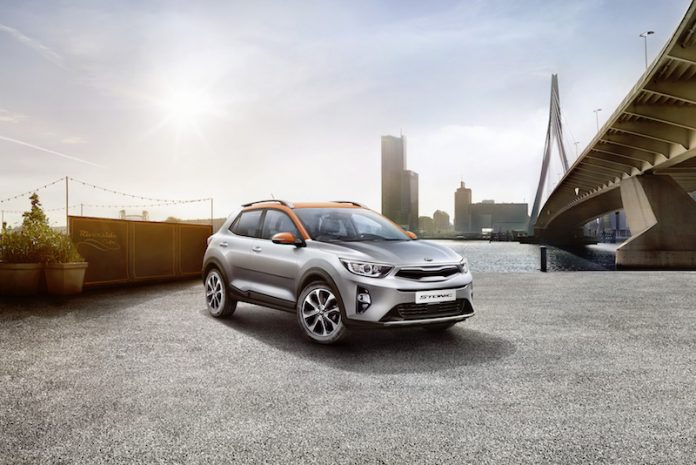 Today Kia has unveiled its new crossover model, the Stonic, which will be act as Kia’s answer to the Nissan Juke. Unlike the Juke though, it’s a bit of a looker, and the Korean brand wants it to look distinctive, whilst retaining identity. This means it has the ‘tiger nose’ front grille, which is joined by a rather chunky front bumper. Like Kia’s other new models, the design is the result of a Euro-Korean collaboration, and I think it’s fair to say it’s a decent effort.

That’s not the only European connection though – the steering and suspensions has been tuned to please us Europeans, but does that mean it’ll be no good for us Brits once we leave the EU? All joking aside, the Stonic should offer a decent drive, and there will be a decent choice of engines available. The smallest unit will be a 1.0 litre turbocharged petrol, which produces 118bhp, which is joined by 1.25 or 1.4 litre naturally aspirated petrol engine. There will of course be a diesel as well, in the shape of a 1.6 litre unit. The new Stonic is inspired by 2013 Provo concept and features a ‘Targa’ style roof, meaning buyers will be able to choose a two-tone look for their model. There are five choice of roof colours on offer and there are are 20 different colour combinations, making it easier to personalise. It’s a good thing that the Stonic looks good as it has a fair bit riding on its shoulders, as Michael Cole, Chief Operating Officer of Kia Motors Europe, states “the Stonic looks set to become one of our best-selling cars.”

Kia has stated the Stonic will offer the best shoulder room in class, as well as offering generous leg and headroom. The boot will offer 352 litres, which is around the same as the Juke, so it’s on the right tracks there. Speaking of the inside, Kia has not gone too much in the specification, but the brand has promised the Stonic will offer the latest technology, including smartphone integration tools such as Apple CarPlay and Android Auto. The Stonic will be a safe place to be, thanks to advanced high strength steel which accounts for 51% of the materials used, plus there will be a good range of safety features available for buyers. These include autonomous emergency braking, blind spot detection with rear traffic cross alert, lane departure warning, high beam assist and driver attention warning.

Prices for the new Kia Stonic are yet to be confirmed and it’s not been announced when the car will go on sale.