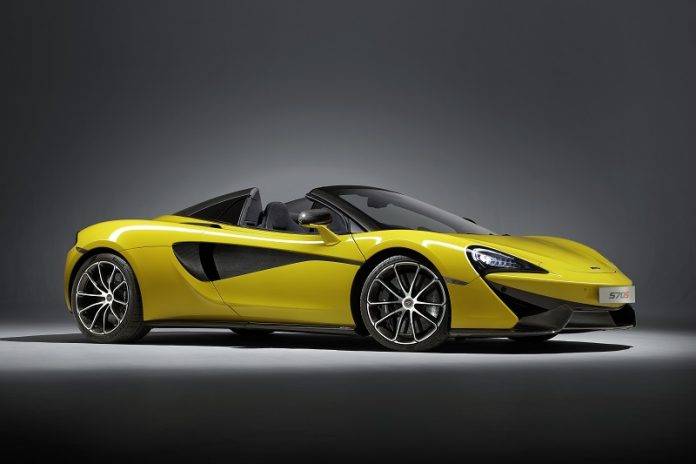 Always fancied a droptop McLaren but couldn’t quite afford a 650S Spider or a 675LT Spider? Well then you’re in luck, as the British sportscar brand has now announced it has chopped the roof of its 570S. Priced from a ‘mere’ £164,750, McLaren has dubbed its new model as the “most attainable McLaren Spider ever”. If you do happen to have that kind of money just lying about, kicking its heels then you’ll be pleased to know that the car is available to order now, with an initial 400 Launch Editions being offered.

What Can It Do?

For those of us – the majority – that cannot afford the car, let’s lose ourselves in some juicy performance figures shall we? The Spider variant may be (rather predictably) 46kg heavier than its Coupe variant but don’t think the hardtop will force the droptop to eat its dust. Naturally, it’s powered by the same 3.8 litre twin-turbocharged V8, which produces 570ps (562bhp), with 600Nm of torque. This means the performance figures are also the same as the Coupe – 0-62mph comes in just 3.2 seconds and it will run out of puff at 204mph, although the top speed is ‘only’ 196mph if you have the roof down. I know, what a pain? The car be lacking a fixed roof, but thanks to the boffins at McLaren, the Spider has the same structural rigidity as the Coupe, althouth the rear spoiler is 12mm to compensate for the slight change in shape.

The roof itself takes 15 seconds to open/close, and can of course be operated on the move, at a speed no more than 25mph. It does of course have a wind deflector, so you can enjoy the wind in your hair without completing ruining your ‘do as you blast about your local B roads. An electric roof of course adds weight, but McLaren has stated that the two-piece roof design has been made with the lightest materials possible to help keep the weight down and the fun factor up.

What Does McLaren Say?

“The McLaren 570S Spider is the most attainable McLaren Spider to date and adds yet another dimension to the McLaren Sports Series family.  This is a convertible without compromise; its mid-engined layout and carbon fibre MonoCell II chassis guarantee the same thrilling dynamic performance and exceptional driver involvement enjoyed in a 570S Coupé, but with the added attraction of a retractable hard-top that delivers the extra exhilaration of roof-down motoring.” Mike Flewitt, Chief Executive Officer, McLaren Automotive. The new 570S Spider will make its debut at this year’s Goodwood Festival of Speed, which will take place between the 29th of June and the 2nd of July.