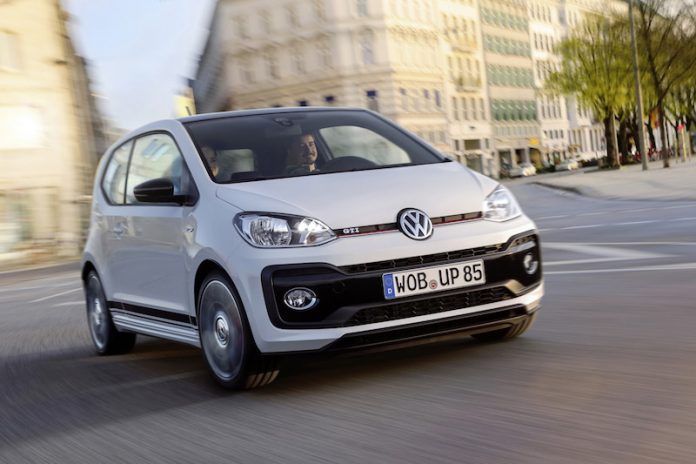 I was starting to think that VW would never make a fast version of the Up! but the German brand has finally come up with the Up! GTI model. Prices are yet to be confirmed, but we can expect to it in showrooms as of next year, but more importantly, what’s under the hood?

The GTI is of course the performance model, but don’t expect the kind of pace that’s really going to set your pulses racing. Underneath the small but perfectly formed bonnet is a turbocharged petrol unit that offers 108bhp – the same as the original Golf GTI – and 230Nm of torque. Because of this lack of power, the 0-62 time is a rather predictable 8.8 seconds and the top speed is a rather conservative 122mph. The car weighs less than 1,000 kilos though, so maybe the fun is to be had in throwing in to corners. Maybe I’m approaching this from the wrong perspective – after all, cars like the Mazda MX-5 are still fun without offering huge amounts of power. I should I know, I have one. Plus the original Golf GTI had similar specs and that did alright for itself didn’t it? And come to think of it, the Up! couldn’t be much faster, as that would step on the toes of the Polo GTI of course.

As with all GTI models, the Up! will feature the iconic red stripe on the grille, which is joined by those three magic letters – G, T and I. It will be offered in either Tornado Red or Plain White, but there are also metallic options including Dark Silver, Black Pearl and Costa Azul, which is a new colour. As well as the GTI badges, the Up! has been lowered by 15mm and sits on chunky 17″ alloys, helping to give this Up! an aggressive look, which is sure to be good for street cred.

VW has dubbed (get it?) this the ‘new original’ but despite this, can it really warrant the GTI badge based on its rather modest performance? What do you think? Thums Up! or thumbs down?