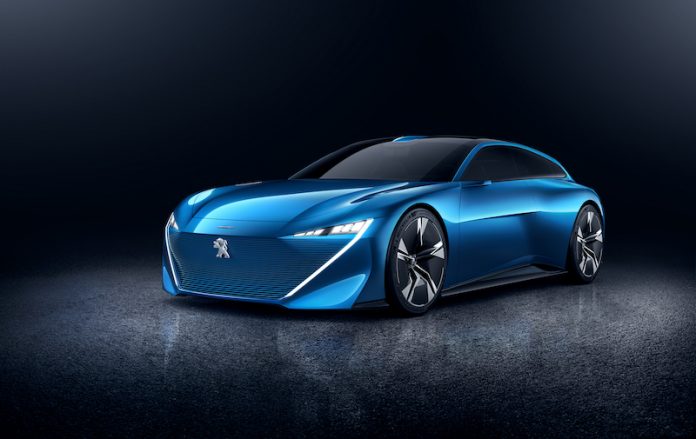 It’s quite a looker isn’t? It’s a long way from the gaping-mouth-grilled Peugeots from old, that’s for sure. What you’re looking at is the new INSTINCT Concept, a shooting brake which is fully autonomous and predictably electric.

An Instinct For Technology

As you can imagine, it’s pretty cutting edge. Powered by a 296bhp PHEV powertrain, the Instinct can be driven as a normal car, or if desired, it can be fully autonomous, allowing the driver to kick back and relax. If the driver is in control, they’ll be able to select two driving styles – Drive Boost and Drive Relax. In fully autonomous mode, the two driving styles on offer are Autonomous Soft and Autonomous Sharp. The INSTINCT cleverer still – it can adapt itself for certain situations. For example, it can read your smartwatch and if it recognises you’ve had a gym session it can waft you home in comfort in Autonomous Soft, allowing you to guzzle your protein shake and rest your weary muscles. It can also sync with the driver’s diary (an electronic one of course) and will prompt them to leave so they can arrive on time.

The design of the INSTINCT is pretty striking and I for one really like it. Not only has it been designed to look good, it’s also been designed to be as aerodynamic as possible, which means better efficiency. Speaking of efficiency; the LED headlights contain cameras which help the scan the road ahead to send information to the driving assistance systems. Peugeot’s i-Cockpit is also installed in the Instinct, offering different displays dependant on which driving mode has been selected. The interior tech doesn’t stop there though – occupants will be able to use voice recognition to summon Chatbot, the car’s personal assistant. Chatbot will be able to offer services such as booking cinema tickets, although I must confess I’m not sure how many times I’ve needed that service from a car. The inside has been designed with an aeronautic inspiration, meaning that the chairs are fully adjustable and can be laid down horizontally if required.

The new INSTINCT Concept will be on show at the Mobile World Congress in Barcelona.