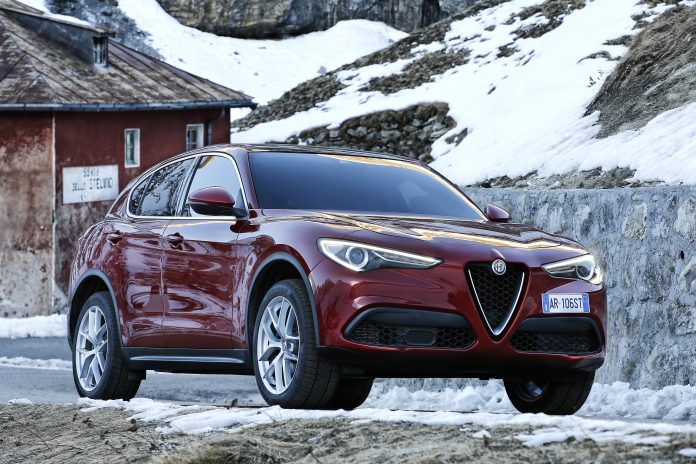 I remember when I first saw the Jaguar F-Pace thinking, “My word that looks good.” Now the new Alfa Romeo Stelvio has come along, making the F-Pace look almost ordinary in one fell swoop. The Italian brand has now released the specification of its brand new – and first ever – SUV.

More often than not, brands will you sell this promise of an SUV that is big and utilitarian, but also sporty at the same time. Let’s face it though, most of the time it doesn’t quite pan out that way. Alfa Romeo is no different, but given the brand’s sporting pedigree you’d be reluctant to scoff at its claims that this goes like it looks. This isn’t just some lovely Italian styling with a few sporty bits added on to give a hint of sport – oh no.

Alfa Romeo has put a lot of thought in to the new Stelvio and the signs look pretty promising. For starters, the heaviest components of the car have been placed in the most central areas of the vehicle, meaning the car has 50/50 weight distribution. The driveshaft is made from carbon fibre and much of the car, including the engine, has been made using aluminium. Powering the Stelvio will be a choice of either a 2.0 litre turbocharged petrol or a 2.2 litre diesel, with another diesel engine being added later after the car’s launch. The 2.0 litre petrol is the fastest out the two, offering 280hp and 400Nm of torque. This means 0-62 comes in 5.7 seconds – around the same as the faster F-Pace models – and a top speed of 143mph.

The diesel, which is the brand’s first to be made from aluminium, offers 210hp and 470Nm of torque. 0-62mph comes in a slightly slower 6.6 seconds and the top speed is 133mph. Both engines will be mounted to an 8-speed automatic gearbox and Alfa’s Q4 four wheel drive system, which powers the rear under normal conditions, but then powers the front as well when grip is low. Despite being able to drive and handle like a sportscar, the Stelvio should be able to waft along in peace and comfort when you’re not in a rush. The inside has been made using a high level of craftmanship, using the best materials for a stylish, but also well laid out cabin. State-of-the-art air suspension is fitted to iron out the bumps in the road and the Alfa D.N.A. system allows the driver to choose what sort of driving style they want.

There will be three trims available on the new Stelvio – Stelvio, Stelvio Super and Tecnica. Stelvio offers features such as 17-inch alloy wheels, 8.8 Alfa Connect infotainment system, cruise control, electric tailgate and automatic wipers to name a few. Step up to Stelvio Super and that adds 18-inch alloys, part leather seats, door sills with steel inserts and a choice of seat/dashboard colours. The Tecnica further adds to this with a 3D navigation system, bi-xenon headlights, electric folding mirrors and comes exclusively with the 2.2 litre diesel engine. All models will feature safety systems such as lane departure warning, blind spot monitoring and autonomous emergency braking.

Prices for the new Stelvio are yet to be announced but that will come closer to the launch date.