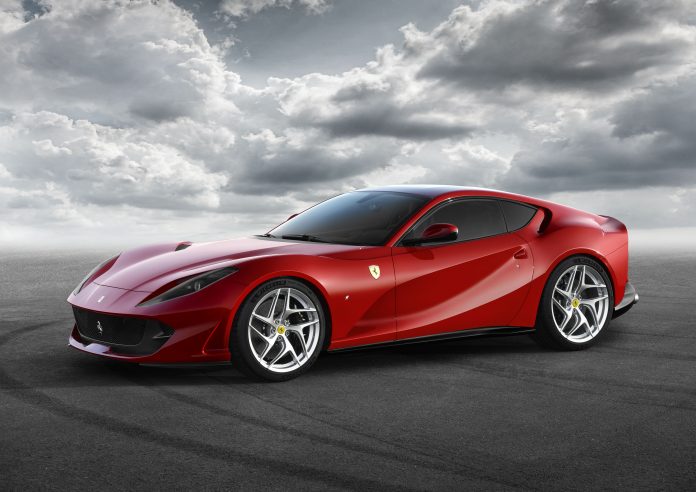 Yeah, I’m not sure on the ‘Superfast’ either, it just a bit ‘braggy’ if you ask me. Mind you, with a 6.5 litre naturally aspirated V12 fitted I suppose its true to its name.

As mentioned, the 812 Superfast features an all-new 6.5 litre V12 which produces 789bhp and a very healthy 718Nm of torque. 0-62mph comes in just 2.9 seconds and the top speed clocks in at 211mph, although Ferrari has hinted it could be higher. This makes the 812 the fastest series production model in the Italian brand’s 70 year history. To mark the occasion the 812 even comes with a new special colour called ‘Rosso Settanta’. Techy as well as (Super)fast

A naturally aspirated V12 may seem a bit old hat now – as much as we’d hate to admit – but the 812 has got some clever tech up its sleeve as well. Ferrari’s latest Side Slip Control has been refined to make sure the 812’s power can be exploited without the need to make a reservation with the Grim Reaper – or the insurance man for that matter. The SSC will be paired with electric power steering, which is a first for a Ferrari model, but has been installed to make the car’s power easier to handle and manage. The Virtual Short Wheelbase system has also been tweaked to make the Italian Stallion more nimble and more responsive. Speaking of responsive, the dual-clutch transmission has been given specific gear ratios to make changing gear even quicker.

The new 812 Superfast was designed at Ferrari’s Style Centre and features a two box design and high tail which harks back to the 365 GTB4 from 1969. The front end features full-LED headlights which have been integrated in to the design of the sculpted design of the air intakes. This means the 812 is sleek and is able to cut through the air like a hot knife through butter. Compared to the F12, the 812 has been given a sportier and more radical look. The steering wheel is new, as are the instrument clusters, infotainment system and air con units. I think the inside looks fab in all honesty but I suppose for the amount of money you pay for a Ferrari you would expect that wouldn’t you? Oh the price? Well that is yet to be announced but more details could be made available when the car gets unveiled at the Geneva Motor Show next month.