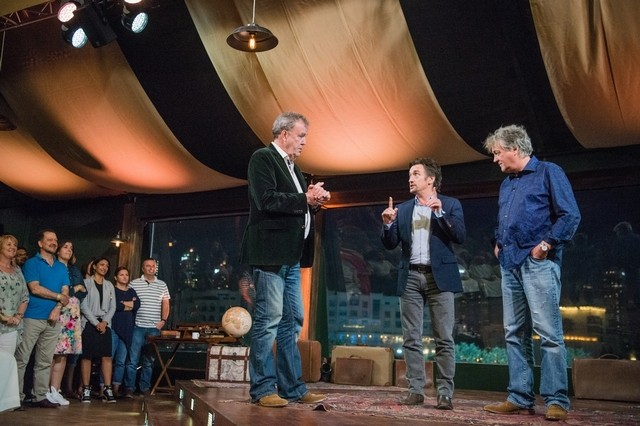 So after a long wait, The Grand Tour has come and gone in what almost feels like a blink of the eye. Granted, it hasn’t always been stellar and there have been a few duds – I refer you to episode 2 – but overall I’d say it was a hit. Let’s face it, it can’t be much worse than the last series of Top Gear. This week brought the last episode of the mammoth Amazon Prime series and if truth be told it was one of my favourites.

One of the things I realised as the show got towards its finish was that this week featured no car reviews, which normally would be an issue in my books, but the content was so good I didn’t really miss one in all honesty. What mattered most was that the show was packed to the brim with cars and it was so enjoyable that I even enjoyed the ‘Celebrity Brain Crash’ section – I know, who knew?

As mentioned, tonight’s show was packed with more cars than you can shake a stick at, which has been an ingredient missing from some other episodes. This week’s show came from the uber-rich part of the world known as Dubai and as usual Clarkson opened the show with some regional based banter before moving on to past v future debate with James May. The pair bickered as to which was better; Clarkson’s petrol powered Golf GTI or May’s electric (kind of) BMW i3. The film didn’t really tell us anything new about the cars, although I did enjoy the running gag that James May was having everything paid for him by the taxpayer – you’ll get what I mean once you watch it. There were a few small tests before Clarkson decided that the pair were to drive from London, all the way to Devon, in typical Clarkson fashion. Predictably Clarkson made it in good time whilst May, well you can probably guess can’t you? Also, if I’m not mistaken, the end of the clip was the first time all season that James May said “Oh cock” – normal order has been restored.

What A Bunch Of Winchers

Speaking of James May; Clarkson and Hammond decided it would a good idea to send him in to the English Countryside to introduce him to the rather bizarre world of winching. If you’ve not heard of it before, it basically involves driving somewhere where it’s really muddy, getting stuck (on purpose), before getting themselves winched out. Yes, that really is a thing and no, I don’t get it either. However, it made for good entertainment and although the humour consisted mostly of May falling over again and again, I was in stitches. His remark “lucky bastards” had me in hysterics.

There was another past v future duel later in the show, only this time it was a fair bit spicier. Dubai was the destination for this epic duel, which featured the Porsche 918 and a rather striking black and white Bugatti Veyron. I won’t tell you who wins but I will say that I guessed right (just sayin’). After this was a bonus round with what looked to a standard Nissan SUV. The performance was far from standard though, that’s for sure! Ah drifting, something I’ve always wanted to have a proper go at but not had the right opportunity to as of yet – hopefully that will change this year. It seems as if Richard Hammond hadn’t quite mastered it either as he openly confessed that he was no good at it and wanted to learn how to do it properly. This meant he had to head to France; more specifically a test circuit called Ladoux – the place where Michelin develops its tyres.

The Hamster was under the watchful eye of chief test driver and master drifter Jerome Haslin as the pair climbed in to a BMW M4. Haslin took the wheel first to show Hammond exactly how it should be done and my word did he make it look easy. Watching him carry transitions was hypnotising and captivating in equal measure. It was truly art. Hammond climbed in the car and it certainly wasn’t art – it was s***. However, in his defence drifting is not as easy as looks, as this video will show you. Yes that’s me looking very foolish. In my defence, that was the result of just 15 minutes in the car.

Getting The Hang Of It

After almost making Haslin sick, Hammond was left in the car by himself and you could see he was starting to get the hang of it and you could clearly see the progress he had made as the day went on. Let me also take this opportunity to say that some of the shots of this film were truly brilliant, but that has been a hallmark of this, the first season of The Grand Tour. By the end Hammond declared he was finally a driving God – a reference to one of his very early Top Gear films.

Not content with that though, Clarkson and May decided that The Hamster compete in a drift competition against professional drifters. However when the two drifters walked out you may have thought Hammond had it easy. This was because one looked like he hadn’t started puberty and the other, well how can I put this, he had no arms. This didn’t stop either of them putting in a truly spectacular show and although Hammond didn’t do too badly, his score was pretty woeful…

So the series (or season if you will) is now finished and I for one am rather sad. It’s been one of hell of a ride and I’m already looking forward to the next season!