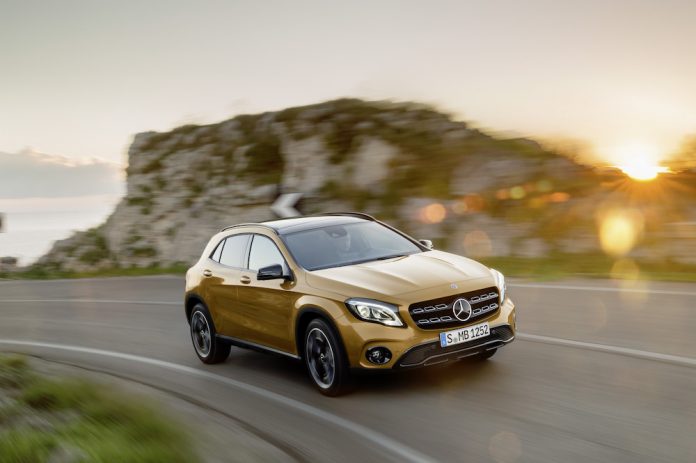 It seems as if Mercedes has set out to design a car for every eventuality and need on the market, and you know what I can barely keep up with the German brand’s model range if truth be told. It’s not going to get any easier for me though as prices for the all new GLA (that’s the small SUV-like one isn’t it?) have been announced.

Mercedes is know for its refinement and premium build but that’s not stopped the Germans improving the GLA recipe. The changes start to the outside where there have been a few design tweaks here and there to decrease drag, meaning better lower fuel consumption and a more refined drive. The inside has also been refreshed with new seat covers installed and a new speedo fitted on the dash. Five models will come to the UK; three with petrol engines and two diesels. The most fuel efficient engine is the 136bhp 2.1 diesel engine, which is able to reach a maximum of 67.3mpg with 108g/km of CO2 emissions. If you want more spice though then look no further than the GLA 45 4MATIC, which is fitted with a 2.0 litre turbocharged four-pot unit. This produces 381bhp and a respectable 475Nm of torque. 0-62 comes in just 4.4 seconds (seriously?!) and the top speed is limited to 155mph. There will also be a special edition of the GLA 45 4MATIC available, which has been applied to some of the other models in the Mercedes range. The special edition includes AMG performance seats with yellow trim, in fact the yellow trim can be found across much of the cabin. The Yellow Night Edition also features aero tweaks, Merc’s Night package and Light and Sight package. The price for this special edition is £53,135. How Much Is The Standard Car?

Speaking of prices, the base model will start from a more agreeable £25,800, which will give you the GLA 200 SE. This trim level brings features such as keyless entry, Apple CarPlay, reversing camera and off-road comfort suspension. A 360-degree camera is also available although that will cost you an extra £330 on the base model.

The new car is available to order now with deliveries coming in April.