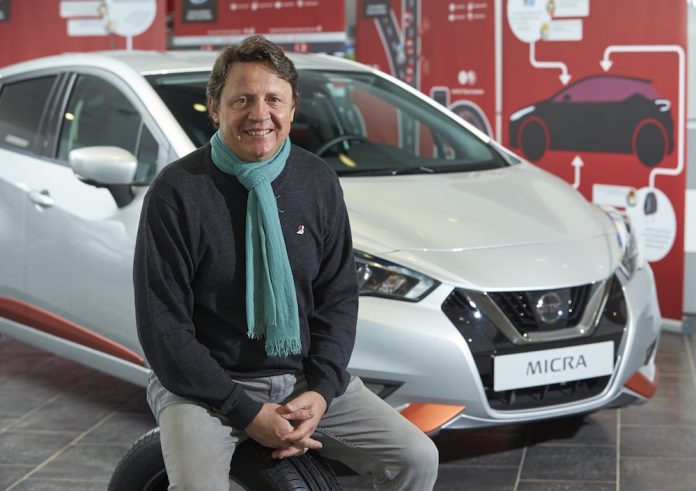 I’ll be honest, I have never really been a fan of the Micra. I’ve found the styling either too dull or too cartoony and I’ve always had a sense that the people who drive them do so in order to get from A to B, rather then for driving pleasure. I find quite the majority of them are driven badly as well, but that’s another.

Things look to be different with the new model though. It looks funky and current, and in my eyes the front end kind of looks like a condensed Nissan GTR. So it looks as if the Japanese brand is really trying with the new model. Just for good measure though an ex-Formula One driver has been drafted in to help make the car more dynamic to drive.

The driver in question is Stefano Modena, a man who competed in over 80 Grand Prix races and shared the podium with legends Ayton Senna and Alain Prost back in ’89. The Italian has been drafted in to help with the development of special Bridgestone tyres which will help the new Micra better performance on the road.

​​Stefano commented: “Nissan has been very demanding of Bridgestone for this new Micra, which is a great thing because it means it had very clear goals for the dynamic performance of the car. We really worked very hard to fulfil its requirements, and I believe we have.”

Thousands of kilometres have been covered throughout testing to make sure the new rubber was up to the task and Bridgestone’s European Proving Ground in Italy was the location for this. Nissan will be hoping intentions such as this will be enough to draw customers away from the best-selling Fiesta and to also secure the European Car of the Year award of which the Mictra is shortlisted.

​​Stefano continued: “I first drove the new Micra more than a year ago and I was very surprised because it reminded me of a go-kart – very precise steering, very stable. That was only a prototype, now it’s even better. It’s a very agile car that gives the driver great confidence.”

If you fancy seeing Modena in action for yourself, check out this video.