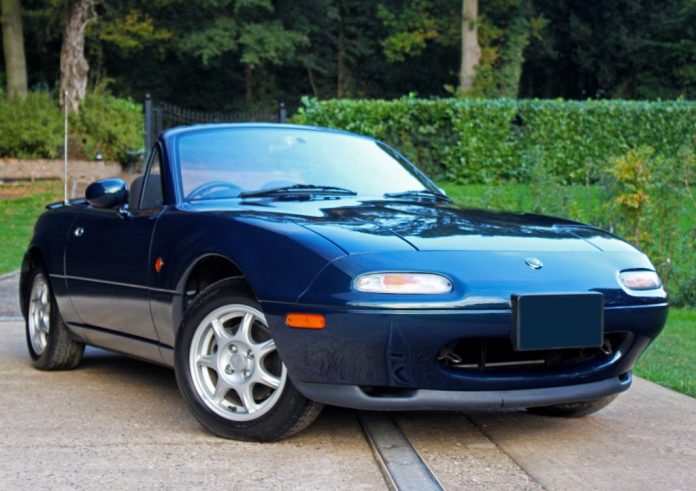 If you follow the site on social media you’ll know that I recently bought a Mazda MX-5. Yesterday in fact, and as you can imagine I’m rather happy about it. So with that in mind it seemed fitting that I dedicate this week’s WWS to the world’s most popular roadster. The model in question is the Mk1, genesis for what has become such a winning formula from the Japanese marque.

Forget Jose Mourinho, This is the REAL Special One

This is the Eunos S-Special 1 offered by Boss Motor Company, which comes from 1997 and of course, has been imported from Japan. It’s fitted with 1.8 litre engine which produces 133bhp which is not exactly able to offer blistering pace but let’s remember, that’s not what this car is about. The engine is mated to 5-speed manual gearbox with powered being fed to the rear wheels.

As this is a special edition this model also features uprated suspension, which makes use of Bilstein shock absorbers and thicker anti-roll bars plus there is also a limited slip diff to improve cornering. So far it’s sounding a lot like my car, and it even has a similar paintjob, although the official colour for mine is ‘Racing Blue’.

Inside the car you will find black cloth seats, air conditioning, electric windows, Roadster themed scuff plates, plus the car comes with its original hardtop. I’ve looked at quite a few MX-5s recently so I can tell you that judging by the pictures this is one of the tidiest used examples you will come across, which is just as well as it’s a bit steep.

The price for this Japanese bundle of sporty loveliness is £15,950. Gulp. That’s about the same as the four cars I’ve owned put together. You’ll be pleased to know that this model has covered just 3,000 miles and comes with service history plus original Japanese handbooks. The car will also come with a new, clean MOT and a Mazda main dealer service. This may seem pricey now, but if it’s looked after I can only imagine the value going up…