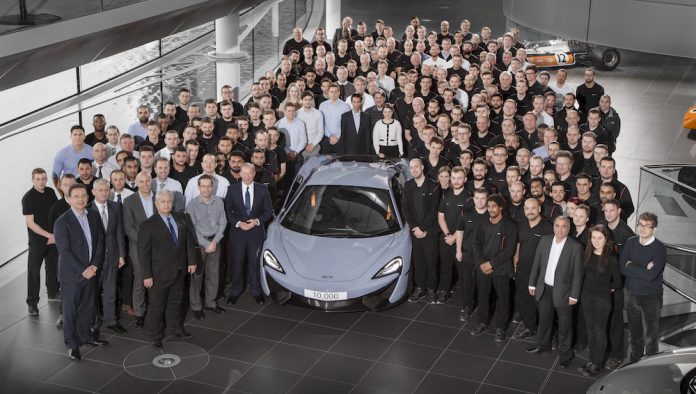 McLaren Automotive marked a rather special occasion recently as the British firm was able to see its 10,000th model of the production line. 10,000 may not sound overly impressive, especially as brands like Ford are able to pump out Fiestas like no-one’s business, but don’t forget McLarens aren’t exactly everyday buys.

The car crossing the Woking production for the 10,00th time was a 570S finished in Ceramic Grey from McLaren Special Operations. This comes over just five years the brand finished its first car, the 12C and since McLaren Automotive it has gone from strength to strength, as McLaren Automotive Chief Executive Officer, Mike Flewitt will now explain… Flewitt said: “The production of the 10,000th McLaren is a significant milestone in the short history of the company. The fact that it took us 42 months to build our 5,000th car and just 22 months to build the next 5,000 speaks volumes about the pace of development of the company. Much of that development is thanks to the introduction of the Sports Series family of cars and it’s therefore fitting that the 10,000th car is a McLaren 570S.”

McLaren has also doubled its production rate, 10 cars made per day has now become 20, to cater for the new Sport Series cars such as the 540S, 570S and 570GT. On top of this the brand was able to announce a third year of profitability and it’s also on course to double the amount of sales completed in 2015.