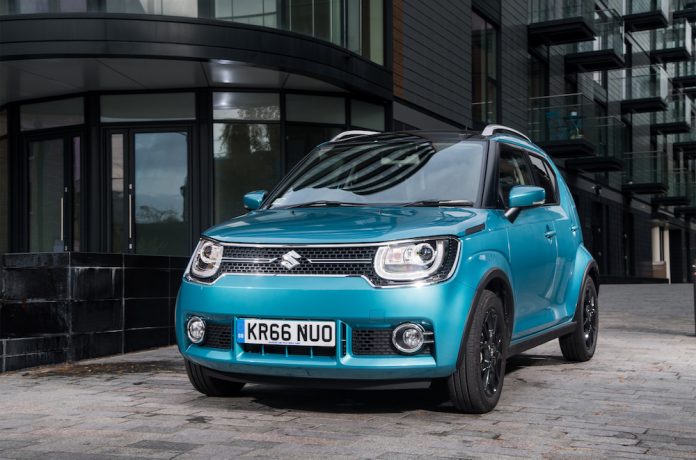 Suzuki has not only brought back on name in the form of the Baleno, but also the Ignis, which is arriving next year. The Japanese brand released the details for the new compact crossover today and I’m sure you’ll find it’s rather reasonable. So without further ado, let’s jump in to this cute looking crossover and see what’s all about.

The Ignis may be a small crossover and it has a small price to match with the base model SZ3 starting £9,999. For this buyers can expect a pretty generous specification including six airbags, air conditioning, DAB radio with Bluetooth and front electric windows.

£11,499 will give you the mid-range SZ-T model; this is able to offer a bump-up of options including sat-nav, 16″ alloy wheels, roof rails and wheel arch extensions. You do lose a seat however – four seats are offered instead of five, but they do slide individually.

The  range-topping SZ5 starts at £13,799 which boasts features such as automatic air conditioning, Dual Brake Camera Support, keyless entry, front and rear electric windows, LED headlights and front fog lamps. All models will be powered by a 1.2 litre petrol engine which can either be mated to a 5-speed manual or 5-speed automated manual gearbox. The SZ5 trim is also available with Suzuki’s Smart Hybrid Vehicle by Suzuki, which may not the most catchy name but thankfully the technology makes up for that. The system uses something called an Integrated Starter Generator, which acts as both a generator and starter motor.

Let me try and explain this without sounding like James May; basically it’s a belt driven system which assists the car during take-off and acceleration, plus it regenerates electricity from braking. This system is able to offer an impressive 97g/km of CO2 emissions and 65.7mpg, which should be more than enough for most in and around town.

The SZ5 with SHVS is also available with Suzuki’s ALLGRIP four-wheel drive system, which let’s be honest is likely to be ever used but I suppose it’s nice to know it’s there if you need it. The four-wheel drive ought to keep you on the straight and narrow, but just in case you do find yourself a sticky situation be safe in the knowledge that the Ignis has been awarded top marks in Euro NCAP testing.

The standard boot size is exactly anything shout about with a capacity of 276 litres, but it can be increased to either 514 or 1,100 litres depending on the seat layout, which is a bit more attractive. Speaking of attraction, the Ignis is available in one solid colour, five optional metallic colours and five two-tone colours. You want my advice? Go for the white with the black alloys, it looks fab.