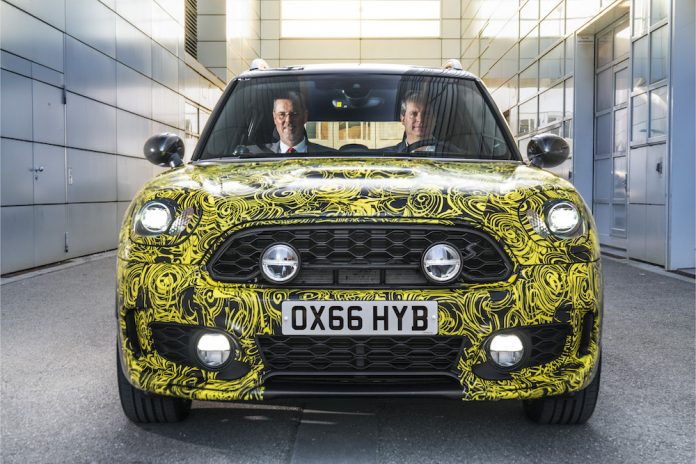 Well, half electric anyway. Yes, that’s right Mini has built a new hybrid model that is in the last stages in development and could be on it’s way to the market in the near future. Not too sure when as of yet but I would have thought it would be this side of 2020. The test vehicle was taken out for a spin by Head of Mini brand management Sebastian Mackensen and Head of series management Peter Wolf.

You can tell how important they just by how long their job titles are. Anyway, enough of career paths, what about the car?

Turn up the voltage

Start up the Mini and you’ll be greeted with no noise, leading you to think it’s not turned over. This is because the Mini Hybrid always starts in electric mode – so make sure it’s charged! The electric power is fed to the rear wheels with a traditional engine powering the front. The combustion engine won’t kick until unless the car hits enough speed or the throttle is used in a vigorous manner.

Mini is keen to stress that despite having the extra weight of batteries the Mini still retains its go-kart handling and because the batteries have been put low down towards the rear, the weight distribution is better plus it’s lowered the centre of gravity. The Mini itself looks pretty much the same as any other Mini as the charging port has been put discreetly in the left side and the inside will be familiar to current Mini owners.

In fact the only real differences inside are the start/stop button which is highlighted in yellow rather than red and the RPM counter has been replaced with a power display. The car can either be driven in all-electric mode – range not announced of yet – the second mode of course brings the engine in to play whilst the third mode uses that same power source to charge the batteries vi a generator.

Beyond that there are not too many other details to be had at the moment but watch this space as it appears Mini is very close to getting its first hybrid Mini nailed down.