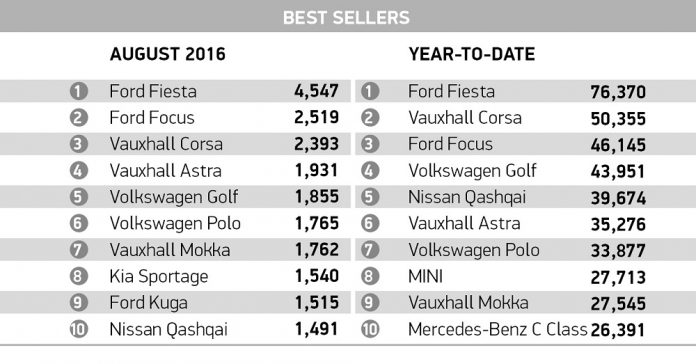 2016 has been a booming year in terms of car sales – and production for that matter – but things slowed down during the summer as the market came to a stall – most likely due to summer holidays and people waiting for the new 66 plate to come along.

Even so, August saw a 3.3% increase in car sales and September is likely continue that trend now the 66 plate is here. 81,640 units were shifted last month, bringing the total of new car sales in the UK to an impressive 1.68 millions cars sold.

It was the fleet sector that drove the most sales – a 7.7% increase was achieved thanks to finance deals and discounts, whilst private sales fell by 0.2%. Diesel cars also fell by the same amount although petrol saw a rise of 5.3% and alternatively fuelled vehicles (AFV) saw big gains of 30.8%. This means AFVs sit on on a figure of almost 54,000 year-to-date, surpassing last year’s 44,000.

The Ford Fiesta has been the best-selling car by some distance and August is no different – 4,547 rolled on off dealership forecourts with it’s bigger brother, the Focus coming in second with a figure of 2,519 models sold. Taking the bronze medal is the Vauxhall Corsa that;s not too far behind the Focus with a total of 2,393 units sold. The Corsa does remain the second best-selling car of the yeat though with a figure of 50,355 which is over 25,000 behind the Fiesta’s muscular 76,370 figure.

What does the SMMT say?

Mike Hawes, SMMT Chief Executive, said, “August is traditionally one of the quietest months as consumers look ahead to the September plate change, so growth, albeit small, is good news. With showrooms full of exciting models featuring the very latest technology and a raft of affordable finance options, it still makes economic sense to consider buying a new car. The key to maintaining this strong market is consumer confidence for which we look to government to deliver the conditions for economic growth.”