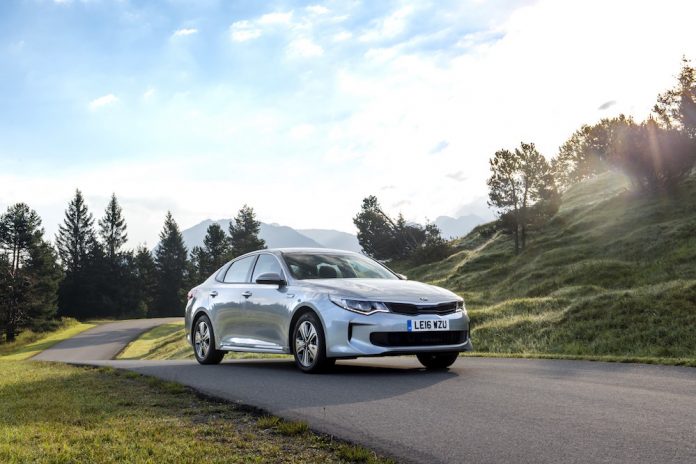 You wait for one new Optima model to come along and then two come along at once! Not only has the Korean firm introduced the Sportswagon but it has also announced a plug-in hybrid to the Optima range.

Kia has set itself an aim to lower its average CO2 emissions of its range by 25% by the end of the decade and the new Optima PHEV is certainly a step in the right direction.

What are the details?

The Optima PHEV is priced at £31,495 (after the £2,500 government grant) and will have a range of 33 miles in all-electric mode. The 50kW electric motor offers 67bhp and is coupled with a 2.0 litre petrol engine which produces 154bhp. This means a total power output of 202bhp with 375Nm of torque.

The combined system is mated to a six-speed automatic gearbox and has the potential to deliver up to 176.6mpg. CO2 emissions come in at just 37g/km and the top speed is 119mph with a 0-60 time of 9.1 seconds The petrol tank has been cut by 15 litres to accommodate the batteries and the boot has been cut down to 307 litres. ​​What kit does it come with? As well as low-drag bumpers the PHEV also uses regenerative braking and something called Economy Driver Assistance System (ECO-DAS) which technology such as Coasting Guide Control to help conserve power. Drive Mode Select gives drivers a choice of Eco and Normal driving modes which as you guessed it, offers either economical driving or greater performance.

The suspension has been re-tuned to help deal with the added weight of the batteries and the car also features larger brakes to give better stopping power. Just in case the brakes aren’t enough to prevent a collision then fear not. like the other Optima models the PHEV has a five star NCAP safety rating to give peace of mind. The Optima PHEV will be available towards the end of 2016 and will start from £31,495 (after the £2,500 government grant).