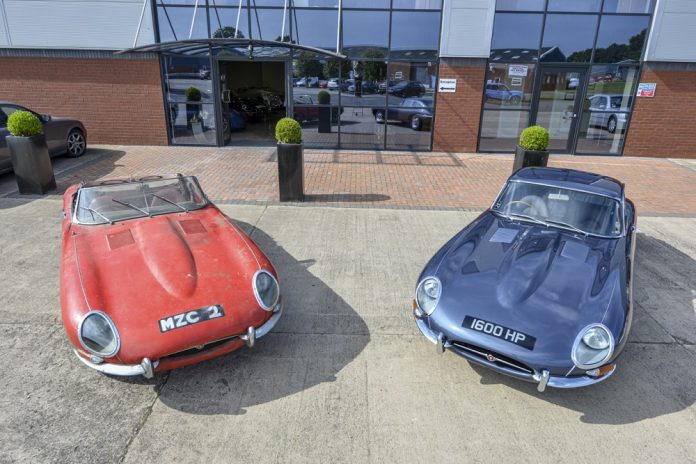 Everyone loves a happy reunion don’t they? That’s why Long Lost Family is popular I suppose, not that I’ve ever watched it. This is a rather romantic tale of two Jaguar E-Types that have crossed paths after being separated from birth in 1961.

The two E-types were both produced on the 24th of August, 1961 at Jaguar’s Brown Lane production site in Coventry before going their separate ways until today – their 55th birthday. The meeting place for this reunion/birthday party was Classic Motor Cars in Bridgnorth, Shropshire where Stuart Cardwell – owner of the Coupe – and Tim Leese of the CMC shared the birthday cake made to mark the occasion.

​The cars may have had the same start in life but it’s clear by looking at them their paths have been different. The Coupe is in concours condition – it was a runner-up last year at Salon Prive in fact – thanks to a previous restoration by CMC whereas the red convertible is in a bit of a sorry state as it’s spent 20 years off the road and kept in a barn. The drop-top will get the chance to sign again though – CMC has acquired the car and plans to carry out a full restoration.

Stuart Cardwell said: “This is the first time the two cars have been next to one another after they parted company 55 years ago. In the case of my car, it has been all over the world. It was dispatched to Jaguar Cars New York in September 1961, sold to a Japanese collector in Tokyo in 1996 and repatriated back to the UK when I purchased it in 2012.”

He added: “CMC restored my car, which is now considered to be exactly as it would have left the factory in 1961 – no doubt they will do a stunning job bringing Chassis No. 92 back to life.”

Peter Neumark, Chairman of CMC, said: “This world is full of coincidences; that both the first inside bonnet lock RHD coupe and roadster to end up in the same restoration facility is one thing, but then to discover they were both produced on the same day – August 24th 1961 – is remarkable!”