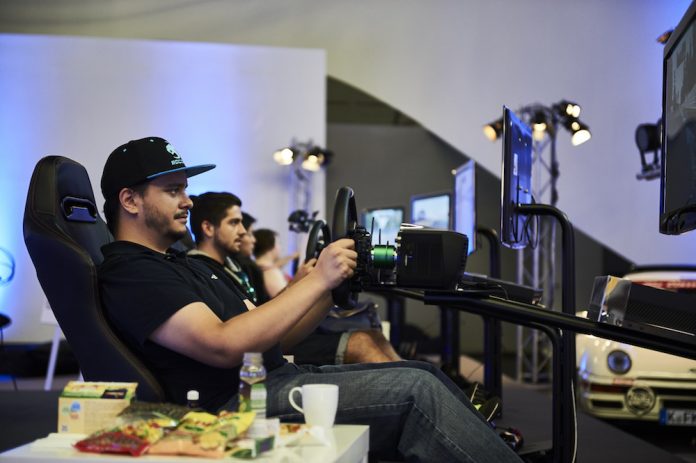 A few days ago I wrote about Ford’s ‘Dronekhana’ and in the article I mentioned Ford had an audacious challenge to set a new Guinness World Record of the ‘Longest video marathon on a racing game’. It coincided with the European Gamescom fair which took place in Cologne, Germany this week and the challenge itself took place at Ford’s European HQ which is also in Cologne.

Ford enlisted the help of five gamers to take on the world record attempt – Cara Scott, Hélène Cressot, Johannes Knapp, Andrea Lorenzo Facchinetti and Jesús Sicilia Sánchez. For the sake of this article I will call them the ‘Ford Five’. Together they were able to produce a total time of 48 hours, 29 minutes and 21 seconds, beating the previous record of 48 hours and 1 minute.

Throughout the marathon the five gamers were able to get through 32 energy drinks, 146 bottles of water, 47 bottles of soft drinks and over 3kg of sweets. Sleep was almost unheard in the challenge as the ‘Ford Five’ had to rely on power naps here and there.

The car of choice was the Ford GT which was raced around the virtual tarmac of the Le Mans circuit, a track where the real life Ford GT won earlier this year. Each ‘driver’ averaged an astonishing 603 laps and combined they covered a distance 41,004km – that’s the equivalent of driving around the world.

The game used was Forza Motorsport 6, a game Ford has helped to engineer to ensure the game offers the most realistic simulation possible. The American car firm has also partnered with Microsoft for the Forza Racing Championship which is open for all levels of ability.

“For me, it’s incredible to see anyone stay up all night, whether it’s for a bumper car marathon or four days of watching television,” said Lena Kuhlmann, official adjudicator, GUINNESS WORLD RECORDS. “Two days of race gaming is a superlative effort. The endurance of the gamers is remarkable. They were engaged, concentrating and having fun even after the record was broken. It’s also great to have the actual Ford GT in view, to keep the gamers from getting completely immersed in the virtual world.”