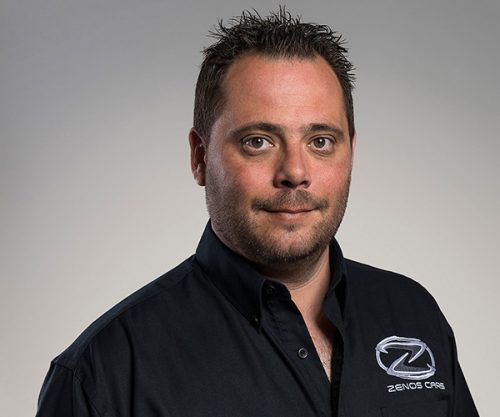 After having a look around the Zenos facility I was able to catch up with managing director Mark Edwards to talk about the company in more depth.

We had such a good chat that I’ve actually had to break it into two parts. Here is part one, I hope you enjoy.

Zenos, where does the name come from?

Mark Edwards: So do you want the long answer or the short answer? Or both?

AAW: Give me both. [I chuckle]

ME: The long answer – We wanted a two syllable name; the ‘Zen’ is based on the Zen philosophy of dropping illusion and seeing things for what they are without distortion – much like our cars. The ‘Os’ is from the Italian for spine or bone, much like the large aluminium spine that underpins our chassis.

The short answer – we wanted something with Zs or Ks because they’re kind of catchy, something two syllable and Zenos kind of sounded cool

What inspired you to start the new company? What was the company’s goal?

ME: Having worked for Caterham and prior to that at Lotus, we believed that there was a significant and growing market for lightweight, fun and affordable sports cars.  When we sold Caterham to Tony Fernandes is 2011, Tony decided he wished to take Caterham in a slightly different direction – if was by then of course his business.  We decided that with Caterham choosing a new direction and Lotus going somewhat upmarket that there was a clear gap in the market.  At this point we decided that it was time to launch our own brand.

The company’s goal is to deliver these products and create a real thrilling drive experience around them. So that is why the car has no power steering, no ABS brakes or other driver aids; it’s a very pure product. We know there is not a market for hundreds of thousands of these cars every year around the world – it’s a niche market – but there is space in that market and enough consumer interest for us to create a viable business which we’ve proven by what we’re doing now.

We have plans to grow the range to three products in total, all off of the same platform that’s been proven with the E10 – for the next 5 years that’s what the business is focussed on delivering. We of course have longer term ideas, but the market is moving so fast anything can change so to have very fixed goals beyond 5-7 years I think would be slightly naive. We always have the view ‘never say never’ so people can say would you consider other directions that is our answer.

Were you afraid that you may not make it among the established British lightweight car makers such as Lotus, Caterham, etc?

ME: Lotus and Caterham have been around for such a long time.

AAW: Hmm, a lot of history.

ME: They’ve produced wonderful products and have a very strong foothold in the market. So for us we knew that as a fresh brand we needed to have a compelling market proposition – therefore one thing that was very important to us was our price positioning.

I’ve seen so many examples in the past where great cars have been developed by very, very clever people – much more clever than we are here – [Mark laughs] they produce the car, one car, they then add up the cost of all the components to work out what they would need to sell it for and they quickly discover there’s a market for just one person. Which is themselves.

So before we sketched a car, built a car, did anything, the first thing we put down on a piece of paper was the price point. We said to be successful in this environment as a new brand we have the get the price right. We worked backwards from there to plan how do we deliver the product we want to deliver at that pricepoint?

We chose to enter the market with a slightly rawer, slightly track-orientated type of product because our experience told us that at that end of the market people are bit more fickle. They will try new things – they are prepared to try something that’s new and a brand that is not necessarily so well-known. This enabled us to appeal to that buying behaviour enabled us to establish a position from which we’re now growing more towards the mainstream market.

What would you say sets you aside from the brands mentioned a few moments ago? You worked for Lotus and Caterham so what do you feel Zenos can bring that they can’t?

ME: Firstly, whilst the car is affordable to purchase, the car is also very affordable to own. For example all the running gear from the gearbox through to the hubs is all Ford. We took a view that Ford have developed those components, they’ve tested them to the moon and back so they work, they’re durable.

They don’t affect the driving characteristics of the car so we chose to invest into the areas such as suspension and chassis that do affect that area driving experience of the car. Therefore, when those components wear, or if someone has a ‘moment’ on track they’re not faced with a huge bill to repair the car.

Secondly, you may have noticed there are a lot of separate body panels, 18 panels in total, and that was very deliberate to ensure that if you do have a ‘moment’ you’re not looking at replacing a huge clamshell or a large front panel with a huge repair bill. That was really important.

Mark then continued by talking about the company’s commitment to its customers.

ME: The other thing is we set out to achieve is to build an intimate relationship with our customers. We know our customers well, they know they can pick up the phone and speak to me if they want to, I’ll always pick the phone up. They can talk about their cars, we take feedback from them. When we developed the first prototypes of the E10,we invited 25 our first deposit holders to come and drive the prototype at the Milbrook proving ground.

That was a big risk, but a bold risk and it paid off. They loved being involved, loved going to a place where they couldn’t normally walk in and they came up with ideas. ‘We like this’, ‘we don’t like this’ and we incorporated those ideas so it’s wasn’t just lip service, saying tell us what you think and we’ll consider it, we actually implemented them.

So for example, the twin display screens came from customer input at Millbrook as our feedback was that customers liked to take out passengers on their adventures and what better way you keep the passenger engaged in driving without physically driving than by making that information available for them as well?