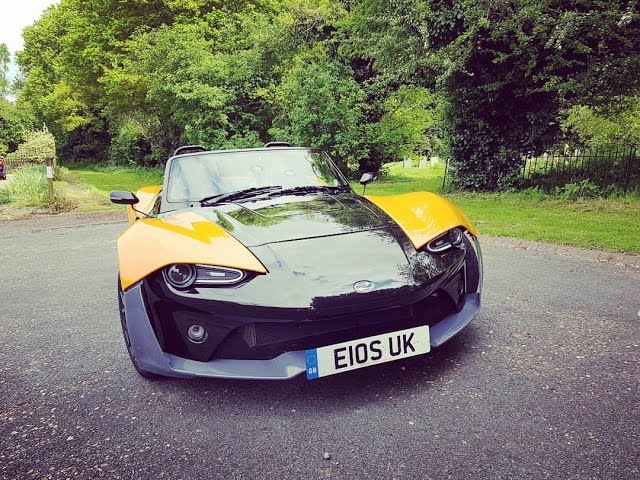 So as you may already be aware, I have been spending some time with Zenos Cars and they were ever so kind to let me have a go in one of their E10S cars.

This is the mid-range model that features a 2.0 litre Ford EcoBoost engine which thanks to turbocharging offers 250 bhp. This means that the little 725kg two-seater will hit 60 mph in just 4 seconds and will go on to a top speed of 145 mph. The cost for this model starts from £32,995 although the model tested had the optional adonised short shift lever and four-point harness which cost £125 and £425 respectively.

The car has no doors so you need to be a tad flexible to get in, plus it may not do your dignity any favours. But once you’re in that will be long forgotten as you get yourself strapped in the four-point harness before firing up the four-cylinder engine. Just make sure you don’t need to access anything once you are strapped in though because you probably won’t get to it. Driving in the country

I set off from the firm’s facility in Wymondham, just outside of Norwich and made my way to a small town called Diss. I instantly fell in love with the engine note and the noise that comes from the dump valve when you lift off the throttle. It’s intoxicating and very addictive! It took me a few moments to get used to the car but once I did I found it easy and manageable to drive. I’ll be honest, I’ve never driven anything like this before but I felt comfortable and in control.

I hit the A11 and was able to get to 70mph in no time at all as I overtook your run of the mill cars that looked towards me in wonder and a little bit of bewilderment. I was soon barreling the country roads and I have to say the E10S was simply a joy to drive.

The driving position did look a bit cramped for my 6’2″ frame but I was comfortable and I was able to find a good driving position pretty quickly. The steering is well weighted and direct and I think it’s worth mentioning here that none of the cars Zenos make don’t come with any driver aids such as power steering, ABS, etc. So everything the car does is a direct result of your driving. But the car flatters you and I think it can make even the clumsiest of drivers look like a competent helmsman. The power is rapid and I found it to always be available, no matter what gear I was in and changing gear was a very pleasurable experience. The changes were crisp and the gearbox has a short throw, exactly what you need for this type of car. The engine makes a lovely racket and as I said earlier, the dump valve noise is very addictive and I’m sure it’s a noise I would never grow tired of.

With 400Nm of torque there are little concerns surrounding acceleration, the E10S will go from 0-60mph in just 4.0 seconds which is enough to scare much more expensive supercars. The car will then continue to a top speed of 145mph thanks to the 2.0 litre Ford EcoBoost engine.

In terms of handling, this is something the Zenos does well, but for me what I found amazing is that despite it’s ability to stick to the road and provide fantastic agility, was the surprising level of comfort. You look at the car and you start to wonder how long you can go in it before the chiropractor needs to be called but there were no such worries.

I’m not going to say it floats over potholes and bumps in the road because that would be lying but what I will say is that the E10S manages them very well. Yes, the cabin is slightly disturbed but would I call it uncomfortable? No. In fact, – and I’m putting my neck out here – I would be tempted to say this car handles certain potholes better than my Seat Ibiza FR would.

The drive in the E10S is one that I won’t forget for a very, very long time. If I had the money I would have taken the car back to Zenos and I bought a new one there and then. Zenos have a very good product on their hands and it’s no wonder so many car publications are singing their praises. I could wax lyrical about them all day if I’m honest but I will stop and simply say if you looking for an affordable lightweight trackday car, be sure to give Zenos a look. You won’t regret it.