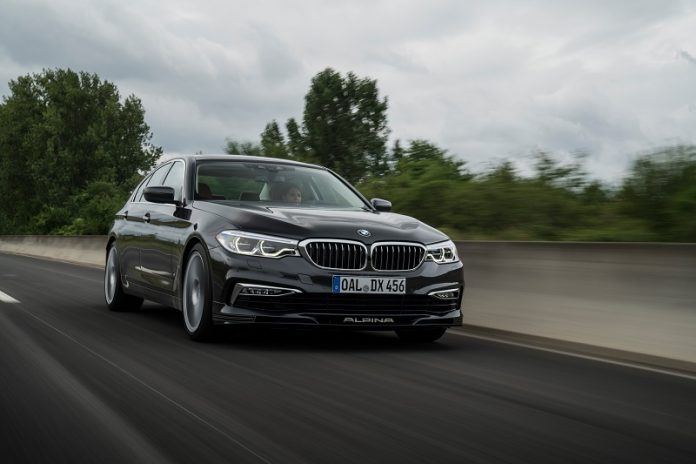 A while back I wrote an article about the simple barn-storming Alpina B5 Bi-Turbo. Here we had an estate car that was capable of hitting 200 mph – mind boggling stuff. However, that’s probably going to be a bit too rich for some, so how about taking a look at the new Alpina D5 S? Sure it’s a saloon rather than an estate, so you don’t get the same level of space, but it’ll be cheaper to run.

A Company Car With Clout

The D5 S may be cheaper to run than it’s fire-breathing B5 Bi-Turbo, but that’s not to say it’s about as much fun as visiting your local library. Underneath the bonnet you’ll find BMW’s 3.0 litre twin-turbo, straight-six diesel engine, which is able to offer 322 bhp with a whopping 700Nm of torque. Mated to an eight-speed automatic gearbox and four wheel drive, the D5 S will smash 60mph in just 4.8 seconds, and continue to a top speed of 171mph. Despite this German muscle, Alpina states that if driven conservatively you can expect 46.3 to the gallon, although that will soon take a nosedive once you hit the loud pedal of course. C02 emissions aren’t bad either, considering the power on off; 161g/km is emitted from the D5 S, leading Alpina to state that the car will be uniquely attractive to company car drivers.

The secret of the DS 5’s pace lies in the way in which it has been engineered. Needless to say, BMW don’t just use any old tat in its car, but even so Alpina looks to better – or indeed replace – stock components. The original turbochargers for example, have been binned, and in their place two small, variable geometry turbochargers have been fitted to provide a significantly faster response. There are bigger intake ducts to allow the car to suck more air in, plus there is an intercooler that is 20% larger than before to give better performance. Alpina has worked closely with ZF to ensure that the automatic gearbox is as efficient as possible, and as a result, around 20% percent is bespoke, and designed specifically for Alpina. The rear brakes are also larger to help deliver the extra stopping power needed for the increased level of grunt.

The D5 S may be a faster car than the one on which it’s based on, but that’s not to say that this is a raw, track monster that is designed to break lap times and shred tyres. As much as Alpina is about enhancing performance, it’s also about enhancing comfort as well. as a result, the brand itself even says that this model is designed for fast road use, rather than track use. The D5 S offers drivers bespoke adaptive dampers which feature a ‘Comfort Plus’ mode, which Alpina states offers a ride that’s able to rival a limousine. UK cars will include luxurious such as Nappa leather seats, leather steering wheel, LED headlights as well as all the other mod cons you would expect from a BMW are installed, but Alpina states almost limitless range of options and leather trims can be specified.

It will be a rare car though, as there will be fewer than 100 cars coming to Blighty, with prices starting from £62,000.