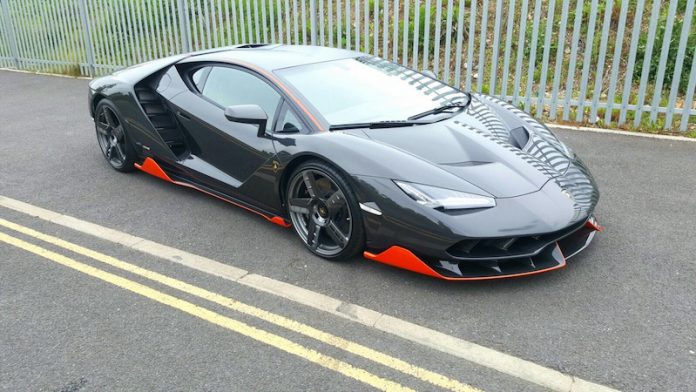 I imagine it’s always an exciting time when H.R. Owen receives a new car, but I imagine the staff were at fever pitch when they received the Lamborghini Centenario over the weekend. In fact, it’s the first of its kind to hit the UK and is on sale for a customer lucky (and rich enough) to get their hands on it.

A Century Of Raging Bulls

For those of you with an Italian tongue, you’ll know that Centenario translated in to English is Centenary. This is because this model, of which 20 coupés will be made and 20 roadsters, celebrates what would have been founder Ferruccio Lamborghini’s 100th birthday. Like the uber exclusive Veneno, the Centenario is based on the Aventador and is powered by a 6.5 litre V12 producing 770bhp and 690Nm of torque. This means you’ll be propelled to 62mph in just 2.8 seconds and it will continue to blast its way to a top speed of around 220mph. It’s mated to a 7-speed flappy paddle gearbox and the power is transferred to the road via four-wheel drive. As well as a brut of an engine, the model for sale by H.R. Owen features bare carbon details, colour accents and a matte roofline, meaning it will look good in just about every garage. Let’s hope that whoever does buy it actually drives the damn thing, and that it doesn’t become a garage queen, because if you ask me, that’s no good for any petrolhead, even if it does cost a pretty penny. For more details of the Centenario, head to the the H.R. Owen site.