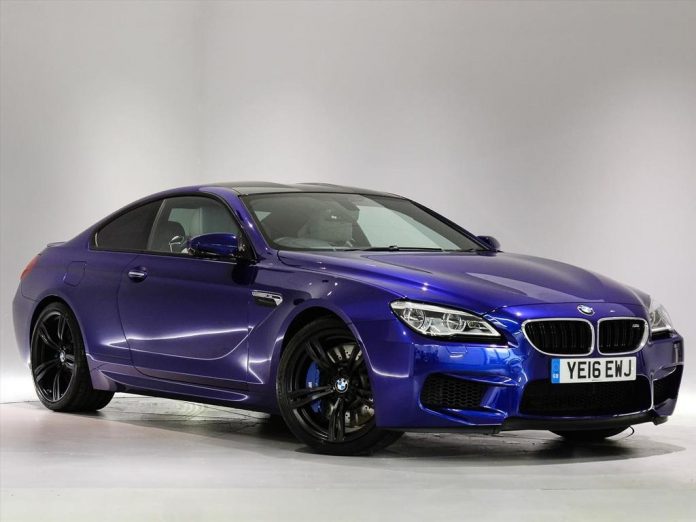 I must admit I was kind at a loss when I was trying to choose a car for this week’s WWS – nothing really jumped out at me to be honest. I did however see a blacked out BMW 6 series today which looked sweet, so this car seemed an appropriate choice. The M6 may not seem like an overly exotic choice, but this one has the competition package, which is pretty rare.

That San Marino blue is a really nice touch as well, although I’m really not a big fan of the white leather interior – it’s just a nightmare waiting to happen if you ask me. What isn’t a nightmare however is the 4.4 litre V8 engine, which produces 567bhp and will propel the M6 to 60mph in just 4.1 seconds. As is the way with German performance, the top speed is limited to 155mph although that will be more than enough in the real world.

I think the current M6 looks pretty good too, apart from that chrome grille of course. It’s more sleek and honed then the previous version which was described as a ‘parrotfish’ by Richard Hammond a few years back on Top Gear. Adding to the San Marino blue paintwork are 20-inch alloy wheels, finished in black, which makes the specification of this car pretty sweet.

Underneath the body lies the BMW competition package which helps to dial the M6 up to 11 with features such as firmer springs and dampers, bigger anti-roll bars and a ride height that has been lowered by 10mm. It’s a tad faster than the normal M6 and the steering has ben retuned, as has the differential.

Offered by Peter Vardy, this M6 is around a year old and comes with 5,397 miles on the clock. So it’s still practically new and it’s still in great condition. But seeing as this car brand new would cost you around £100,000, the £62,990 price tag seems rather reasonable. It’s almost cheap – kind off.

For more details go to Auto Trader or Peter Vardy.