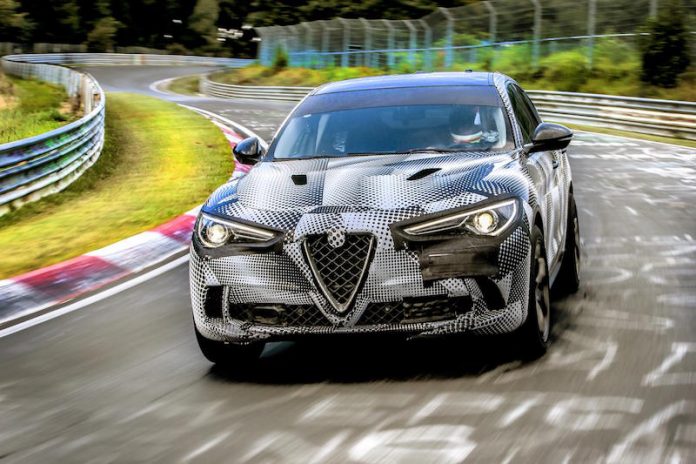 Evening all, apologies for the lack of content the last few days, I’ve been busy filming a selection of cars. Anyway, that was then, this is now. Alfa Romeo has done something rather special with its new Stelvio Quadrifoglio. It’s set a new lap record for an SUV at the Green Hell that is the Nurburging.

How Fast Was It?

Ah, that is the burning question. Well, thanks to its 2.9 litre twin turbo V6 – good for 503bhp – it was able to set a new world record time of 7 minutes 51.7 seconds. That’s a staggering 8 seconds faster than the previous record holder, the Porsche Cayenne Turbo. This brute force is mated to all four wheels via an eight-speed automatic transmissions, and helping to achieve this record was Italian race driver Fabio Francia. Recognise the name? Well he was the same driver that achieved the fastest time for a four-door saloon around the same track in the Giulia version of the Quadrifolgio. The time was 7 minutes 32 seconds, in case you were wondering. Back to the Stelvio though, not only is that time 8 seconds faster than the Cayenne Turbo, but it’s also faster than the likes of the previous Ford GT and the Lamborghini Gallardo. Not bad going for a high-riding SUV is it? Check out the video below to see the lap itself. The new Stevlio Quadrifoglio is not yet available, but it will be as of next year.