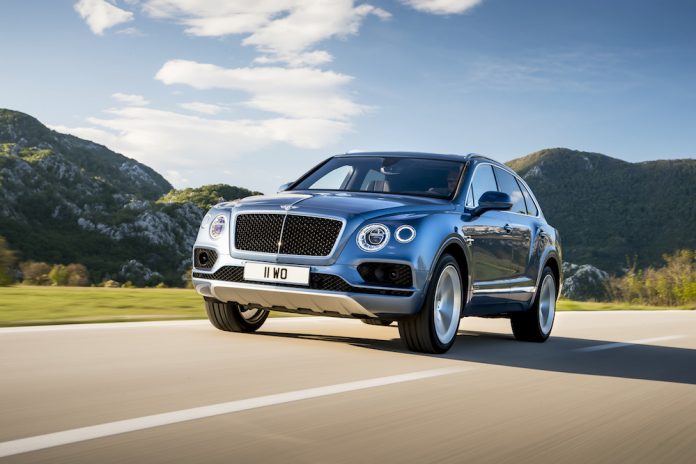 Earlier this week Bentley announced it was to plonk a diesel engine in to the Bentayga and I must admit I didn’t see the significance. After all pretty much every SUV has a diesel engine. But despite being around for almost 100 years, Bentley has never put a diesel engine in one its cars. Until now of course.

So now for some headline figures from the 4.0 litre V8 diesel. With a power output of 429bhp, the diesel Bentayga is the fastest in its class and it also emits the lowest amount of CO2 than any other Bentley with 210g/km coming out twin-quad exhausts at the back. It will sprint to 62mph in 4.8 seconds and carry on to a top speed of 168mph. Drive it carefully though and you could have a comfortable place in which to cover 1,000 miles in. ​​The newly developed engine is mated to an eight-speed automatic gearbox and has the help of two turbochargers plus an electric supercharger for good measure. This may seem like overkill but the supercharger is there to eliminate turbo lag and will get to work in just 30 microseconds. A whopping 900Nm of torque is available from as little as 1,000rpm, so this Bentayga will be fast from the get-go. ​​The V8 model has seen some styling tweaks as well – a black matrix grille with chrome surround can be found at the front of the Bentayga Diesel and there is a new option of adding 21″ alloy wheels to replace the standard 20″ ones. Climb inside the sizeable car and you’ll also notice a new ‘Liquid Amber’ finish, which is once again new for this model.

The new Bentayga Diesel will arrive early next year and the official price has not been announced as of yet but the Bentayga range starts from £160,200 so you’d best get saving!